How on earth can one score a goal of a free kick, while the referee is still in talks with the opponent's team? 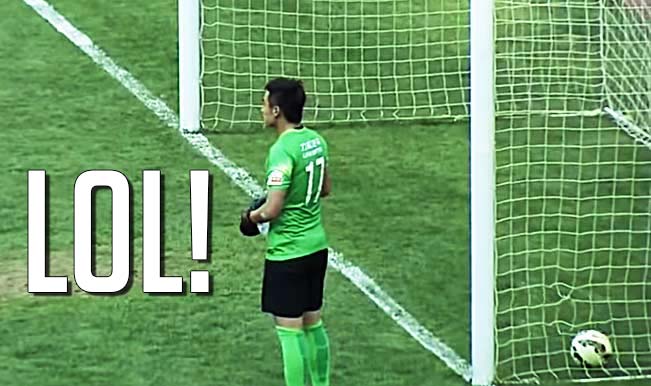 How on earth can one score a goal from a free kick while the referee is still talking to a group of players? Not only the referee blow the whistle for the game to continue but the goalkeeper was on a drinks break too. The amazing free kick took place in a club match in China, between Liaoning Whowin Vs Chongqing Lifan. Also Read - China Pakistan Economic Corridor: Where CPEC Stands Now?

The man in white, pulls the man in red back drawing a foul call from the referee. While the players form a huddle around a referee and discuss the close call, the players in red take the free kick, eventually scoring a goal in the fag-end of the match. The looks on the goalkeeper and the coach’s face is utterly bewildering. The goal is scored in the 84th minute of the match. The fair-play and sportsmanship goes for a toss; like they say, everything is fair in love and war. (Also watch: Watch the Argentine supermodel who can do football tricks in high heels!) Also Read - The Girl On The Train Remake Teaser Out: Parineeti Chopra Tries To Escape Entangled Murder Mystery

Talking about the rule-book, it doesn’t matter how close a free kick is called for near a penalty area, the free quick is still on. However, it the team defending the free-kick needs to form a wall and the referee blows the whistle. (Also watch: Nike Football – The Last Game, Watch the star players ‘Risk Everything’)

Watch full video of this funny goal scored in a Chinese game, where the goalkeeper was caught sipping while a goal was scored, below: