CSK take on RCB in the qualifier 2 of the Indian Premier League (IPL) 2015. Find out the key players in the two teams. 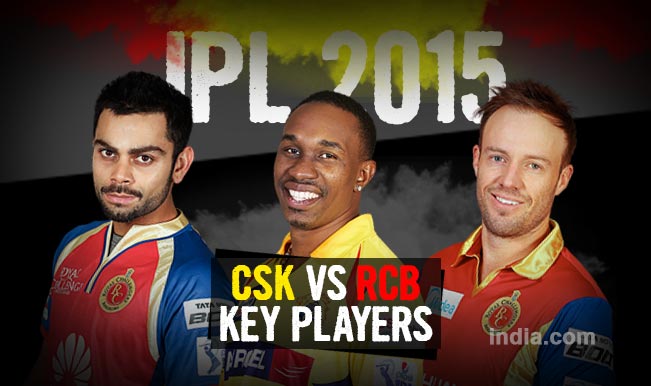 Royal Challengers Bangalore will be facing their arch nemesis in qualifier 2 of the Indian Premier League (IPL) 2015 as they face the Chennai Super Kings at the JSCA International Cricket Stadium, Ranchi on Friday. The side captained by Virat Kohli entered the knockout stages for the first times since finishing runners-up in 2011. Co-incidentally, these two teams were in action in IPL 4 final, where the MS Dhoni’s captained side won by 58 runs. This time though, the conditions and the form of the teams are different although the result could sway either way. Here we take a look at some of the game changers in this match. Also Read - Arjun Tendulkar, Son of Sachin Tendulkar, Gets Maiden Wicket on Debut For Mumbai in Syed Mushtaq Ali T20 Trophy | WATCH VIDEO

AB De Villiers: De Villiers was long criticized for failing in crunch games but he proved everyone wrong with a match-winning innings in the Eliminator against Rajasthan Royals. Being an excellent player of spin with a range of shots that a batsman can only dream of, the South African is the kryptonite to every bowler who considers himself to be a superman. He will be the key to success in this game specially considering the fact that RCB will have to deal with Dwayne Bravo in the death overs with his subtle variations. Chennai Super Kings vs Royal Challengers Bangalore Prediction: Results of all CSK vs RCB matches played in IPL so far.
Also Read - IPL Chairman Brijesh Patel Announces Player Retention and Trading Window Deadline For 2021 Season

Virat Kohli: There is arguably no batsman better than Kohli at the moment in the sub-continent. An excellent player of spin, the Royal Challengers’ skipper will have to take the onus of neutralizing the likes of Ravichandran Ashwin and Ravindya Jadeja. He failed to impress in his last outing but lightning never strikes the same place twice; and the same can be applied to the equation between failures and him. He is the second highest scorer (fourth in IPL 8) for his team in this competition with 493 runs; trailing De Villiers by 19 runs. Another force for CSK to be wary of!

Yuzvendra Chahal: Chahal has taken everyone by surprise in IPL 2015. The lead spinner in this RCB side is their highest wicket-taker ahead of World Cup winner Mitchell Starc and has a crucial role to play in this match. Although he has been a little expensive Kohli and co will be happy as long as he keeps breaking partnerships. The 24-year-old is knocking on the door of the national team and such performances will sooner or later force the selectors to hand him his international debut. IPL 2015 Qualifier 2 Preview: RCB look to use winning momentum to propel past CSK.

Suresh Raina: Raina has been out of form for most of the season, but has somehow found his mojo the Bangalore side. During the clash between the two teams in the league stage at the M Chinnaswamy Stadium, the 28-year-old was adjudged man of the match on both occasions for scoring a half-century. Additionally, he has proved to be a valuable asset on field with his exemplary fielding. Should CSK post a lesser target on board (if they bat first) and unless Chris Gayle et all fail to clear the ropes, the likes of Raina and Bravo will give them a tough time during the chase.

Dwayne Bravo: The current holder of the purple cap, Bravo has been exceptional not only with the ball but also while fielding. In the last game that he played against Bangalore, he laid the foundation for the victory for his team when he sent Kohli from his own bowling through run out. The Trinidadian is thoroughly capable of creating these magical moments and the two-time IPL champions will need him to be at his best against a strong batting side.