After Edward Colston statue was removed from Bristol's harbour, Christopher Columbus' statues in USA and Winston Churchill's in UK has been beheaded by the anti-racism protesters as these historic leaders had a racist past

At a time when ‘Black Lives Matter’ movement is gaining momentum across the world and protests against systematic racism is swelling, the statues of Christopher Columbus, who represented genocide and Winston Churchill, who has a racist past, don’t have a place in the world anymore. Recently, Edward Colston statue was toppled by anti-racism protesters and dumped it inside Bristol’s harbour. Also Read - International Flights: Air India to Operate 14 More Flights Between India, UK From July 15; Bookings to Open on July 13 | Check Details

Colston was a slave trader who built a fortune transporting enslaved Africans across the Atlantic and Bristol was once the UK’s biggest port for slave ships. Even though the statue has been fished out of the harbour by city authorities, a list of more than 60 statues that should be removed in the UK was drawn up by the anti-racism activists. They were later backed by the mayor of London, Sadiq Khan, who announced on June 9 that statues of all the world leaders would be pulled down, who celebrated slavery or racism in some form or the other. Also Read - 'You Had One Job Today': Twitter Points Out as US President Donald Trump FINALLY Wears Face Mask in Public But in Wrong Way Ahead of Elections

Racial protests gained steam in the US after the gruesome murder of African-American George Floyd by Minneapolis officers. The recent merciless killings of Ahmaud Arbery, Breonna Taylor and Floyd, triggered the Black Lives Matter movement that trickled from America to the rest of the world. Also Read - Michael Holding Breaks Down While Recalling How His Mother's Family Stopped Talking to Her Because Her Husband Was 'Too Dark'

Recently, the statue of former Prime Minister of Britain, Winston Churchill, who is largely held responsible for the Bengal Famine of 1943, was defaced. The famine had killed over four million people and at the back of the wave of change, the protesters crossed out the word “Churchill” with black marker pen and wrote the words “is a racist” underneath it on his statue in London’s Parliament Square. 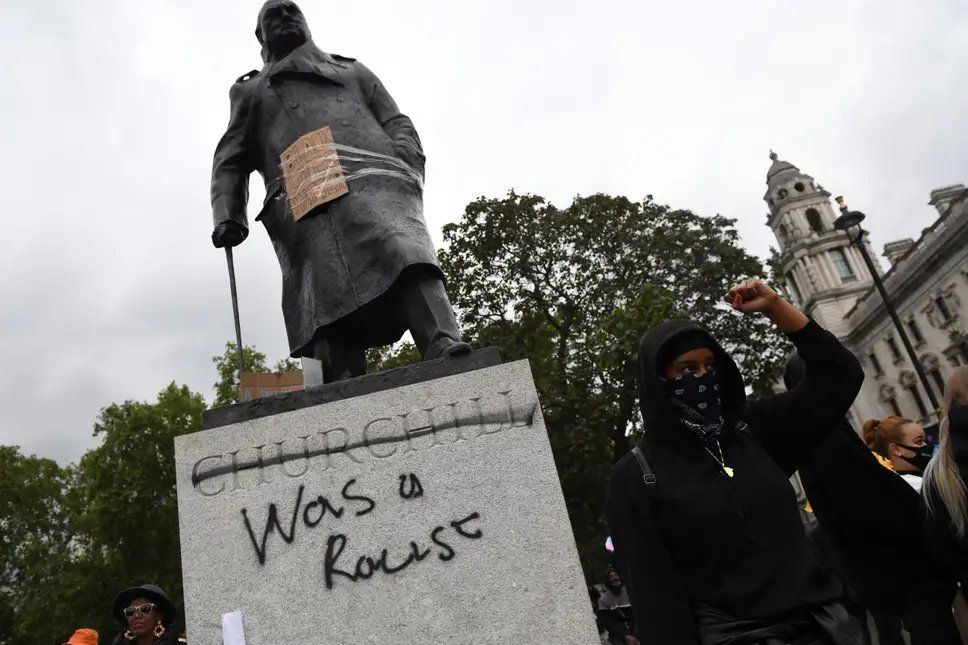 In USA’s Virginia, Minnesota and Boston, statues of Italian explorer Christopher Columbus were damaged. The protesters claimed that Columbus represented genocide and brought racism to America when he apparently discovered it in 1492, by launching the trans-Atlantic slave trade two years after his arrival, initiating slavery and exploitation of the indigenous peoples in America.

Christopher Columbus statue outside Minnesota State Capitol pulled down by the indigenous community. You love to see it. pic.twitter.com/u1KUqSxtKg

Native Americans dancing around a dethroned Columbus statue was the content I didn’t know I needed today ☺️ pic.twitter.com/01BMv5gXtB

While his statue was beheaded in Boston, it was torn down and set on fire in Virginia before it was thrown inside a lake.