The team of Dolly Ki Doli had a blast on Comedy Nights with Kapil, as the two pretty ladies Sonam Kapoor and Malaika Arora Khan grooved to the item song Fashion khatam from their film. 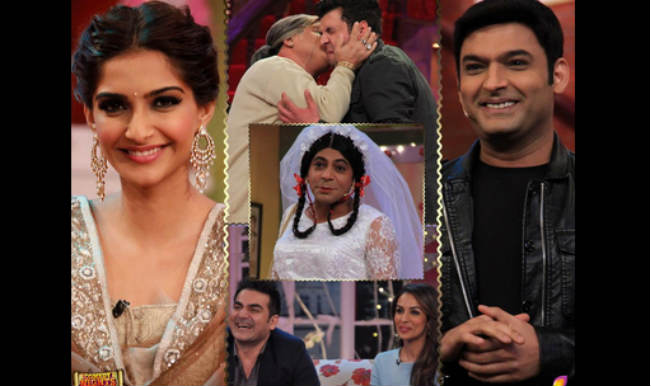 Kapil Sharma has become the king of comedy thanks to his popular show Comedy Nights with Kapil. This week on the show, the team of Dolly Ki Doli lit up the stage, as they were seen promoting the film. Actors Sonam Kapoor, Malaika Arora Khan, Varun Sharma, Pulkit Samrat and Rajkummar Rao graced the stage of Comedy Nights with Kapil in all their glory. This time, the dose of entertainment doubled, as Comedy Circus judge Archana Puran Singh also joined the movie promotions, she being part of the film. Also Read - Kapil Sharma-Ginni Chatrath Name Their Son Trishaan, Here's What it Means

The team of Dolly Ki Doli had a blast on Comedy Nights with Kapil, as the two pretty ladies Sonam Kapoor and Malaika Arora Khan grooved to the item song Fashion khatam mujhpe from their film. Style goddess Sonam looked elegant in a cream coloured lehenga with gold embellishment. Malaika looked chic in a cobalt blue crop top and a skirt. Her husband and producer of Dolly Ki Doli, Arbaaz Khan, was also present on the show. Also Read - Daaku Dulhaniya? Bride Runs Away With Cash & Jewellery After Her Wedding in 'Dolly ki Doli' Style

Dolly and her deewane had a gala time, as Archana Puran Singh and Kapil Sharma stirred up a storm on CNWK. It was a laugh riot for the audience spree and how! The special Dolly Ki Doli episode of Comedy Nights with Kapil will be aired tonight (January 18) at 10 pm ISTon Colors. Also Read - Rhea Kapoor Shares Bold Bikini Picture With Body Positivity Note, Reveals 'I Thought I Was Fat'

Arbaaz’s wife Malaika Arora Khan will reportedly be seen making a special appearance in Dolly Ki Doli apart from the item song. Other cameos might include that of Arbaaaz’s brother, superstar Salman Khan as well as actor Saif Ali Khan.

While everyone has been eagerly waiting to see the chemistry between Sonam and Salman in Prem Ratan Dhan Payo, it will be interesting to get a glimpse of them sharing screen space for the first time in Dolly Ki Doli. Debutant director Abhishek Dogra’s Dolly Ki Doli is slated to hit the silver screens on February 6, 2015.

Here is a sneak peek of what happens on Comedy Nights with Kapil tonight!