This theory points towards the belief that the Earth is not flat, but has a paradise at its core resembling the Garden of Eden, states a Daily Mail article. Like the ‘flat-Earthers’ are people who believe the Earth is flat, this group of conspiracy theorists are called ‘hollow-Earthers’. These hollow-Earthers believe that UFOs are sent from the interior of the globe by ‘guardians of the planet’ to spy on the human race and avoid potential nuclear war. The movement of the ‘hollow-Earthers’ is being headed by author Rodney Cluff, which he claims has thousands of followers after a boom in numbers. Man Creates Homemade Rocket to Prove the Earth Is Flat, Ready to Launch Himself Also Read - In a First, Scientists Detect Light From Behind Black Hole

A representational image of the hollow Earth: 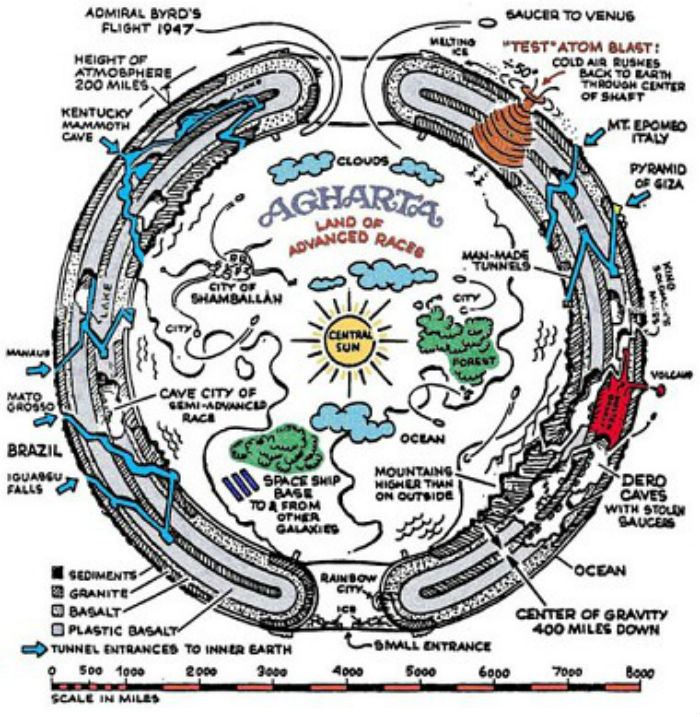 In an interview to the Sun, Cluff said he doesn’t understand how the flat-Earthers can be so confused. The world is not flat – it’s hollow, as shown in an ancient map, he claims. In 2007, Cluff had organised a voyage to the hollow Earth via an ‘opening’ in the North Pole. However, the expedition, which reportedly cost £15,000-per-head, was cancelled. Yet, Cluff remains convinced that an inner paradise with a solar system does exist. Daily Mail states that the conspiracy theorists believe there is another portal in the poles and one in the Himalayas. These lead to a land in which escaped Nazis from World War II and the lost Viking colonies reside.

Interestingly, in 1811, a Norwegian sailor called Olaf Jansen claimed that he had sailed through an entrance to the inside of Earth at the North Pole, and said he lived in the ‘paradise’ for years with his father. Humans there were 12 feet tall and immune from illness, he had claimed. All these theories have been completely rubbished by modern science.