COVID-19: Karnataka Coolie Raises The Bar of Humanity in Times of Corona, Gives up Hajj Savings to Feed Needy

Facebook gushes over Karnataka daily wage worker and his wife as they set an example for the rest of the citizens, give up Hajj savings to feed those in need amid COVID-19 lockdown

As government and celebrities come to the rescue of daily wage workers who have been worst hit by the COVID-19 pandemic, a coolie from Karnataka has been lending out a helping hand too despite the crisis. While Abdurrahman Goodinabali has been working as a coolie, his wife rolls bidis for a living and saving their meagre incomes, the two had geared up for Hajj this year. Also Read - Delhi Government Removes 70% 'Special Corona Fee' From Alcohol, New Prices to Come into Effect From June 10

Obligatory only for those who can afford it financially as well as physically, Hajj pilgrimage in Mecca, Saudi Arabia is the fifth and final pillar of Islam. Liable to be performed at least once in a lifetime, it occurs annually in the Islamic month of Dhul Hijjah but with the raging of the coronavirus currently, Hajj for this year stands cancelled. Raising the bar of humanity in times of Corona, Abdurrahman and his wife were seen using their Hajj savings to feed the needy. Also Read - Uttar Pradesh News: Kanpur IG Mohit Agarwal Pays Fine For Not Wearing Mask in Public

In a Facebook post shared by their son Elyas Goodinabali, it was revealed that the duo put aside their dream for the pilgrimage and decided to feed the empty stomachs with that money. Elyas prayed for his parents health at the end of the viral post and asserted that it was “not for publicity but to inspire others”. Also Read - Unlock 1: Shopping Malls, Restaurants And Temples All Set to Reopen From Monday | List of Dos And Don'ts Here 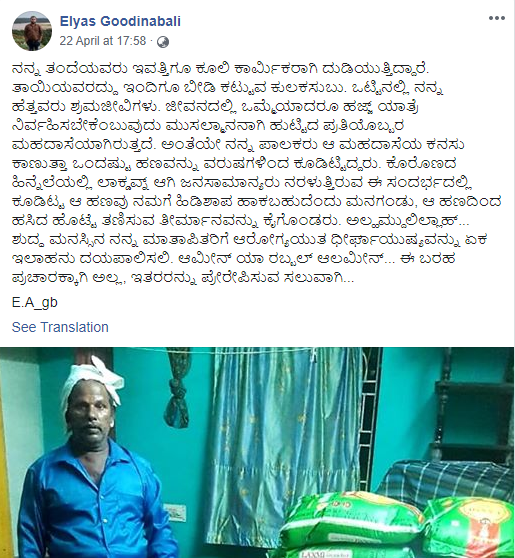 Even as migrant labourers, stuck in different parts of the country due to the lockdown, prepare to leave for their native states after the Centre gave permission for their interstate movement, the Karnataka government on Friday urged them to stay as it prepares to resume economic activities in the state. With eight new cases today, Karnataka’s COVID-19 tally stands at 565, including 21 casualties and 229 patients who have been cured.

Karnataka intends to start economic activites in the state, except in containment zones, from May 4 which is a day after the second phase of the nationwide lockdown is scheduled to end.