Well, this incident of sledging has now triggered the beginning of ruthless cricket to follow in this Tour! 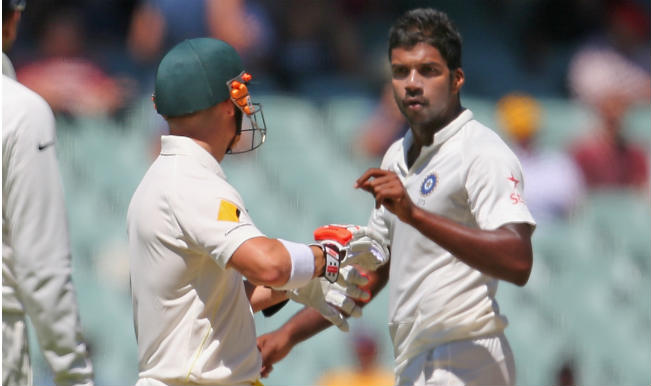 You cannot keep sledging, war of words out of an India vs Australia contest and finally the the Day 4 of 1st Test saw the heated action between the these two fierce rivals. Well, this video is for all those who doubted the series to be played with less aggression in the wake of tragic death of  Phillip Hughes, can see it for themselves that nothing can kill the buzz when it comes down to the wire. The incident took place between Aussie first and second innings centurion, David Warner with Indian pacer Varun Aaron and fielder Shikhar Dhawan. One can watch the Full Video of the Drama of 1st Test in Adelaide on the Official Website of Star Sports. Also Read - Shreyas Iyer, Yuzvendra Chahal, David Warner Expected To Be Top Draws In IPL Mega Auction Next Month

The first incident of verbal-war between the two sides was reported when Varun Aaron bowled David Warner who was batting at 66. The Indian pacer could not help but celebrate it joy and giving a good send-off to the departed Aussie opener. The joys for Indian camp did not last long as the decision was reversed after the third umpire spotted a huge no-ball. David Warner, walked back to the ground and with vengeance as he mocked Varun Aaron’s over joyous celebrations by saying ‘Come’On’ on his face. This did not invite go down well with the other fielders especially Shikhar Dhawan and Virat Kohli who asked David Warner to mind his own business. Also Cricket Highlights: Watch India vs Australia 1st Test Day 4 Full Video Highlights Also Read - IPL Mega Auction 2022: No Ben Stokes, Joe Root and Chris Gayle This Year, 1214 Players Registered

Well, this incident of sledging has now triggered the beginning of ruthless cricket to follow in this Tour!