Deepika Padukone’s Airport Style is All The Athleisure we Need

Another day and another fantastic airport look by none other than leggy top actress Deepika Padukone who was jet-setting out of Mumbai looking ultra chic. Deepika was all smiles as she got out of her car and headed for her flight. She wore a Maje checkered monochrome separates two-piece tracksuit which looked very comfortable. She wore a white t-shirt to complement the tracksuit and keep it hassle-free. She teamed this look with trendy white Nike classic Cortez sneakers, a Celine Phantom tote and Fendi zig-zag sunglasses. Also Read - Drug Nexus Case: NCB Denies Deepika Padukone's Co-Stars 'A', 'R', 'S' Under Their Scanner, Calls It 'False Stories'

Deepika Padukone, who was last seen in the controversial ‘Padmaavat’, had announced her next project with filmmaker Vishal Bhardwaj starring opposite Irrfan Khan. The project is based on ‘Sapna Didi’ a character from a book called ‘Mafia Queens of Mumbai: Stories of Women from the Ganglands’. Due to concerns over Irrfan’s health and Deepika’s back injury, the movie has been stuck in limbo. She recently stated that she had a lot of respect for Irrfan’s humanitarian approach and that she wishes that he comes out stronger. Also Read - No Clean Chit Given to Deepika Padukone, Shraddha Kapoor, Sara Ali Khan: NCB Dismisses Report 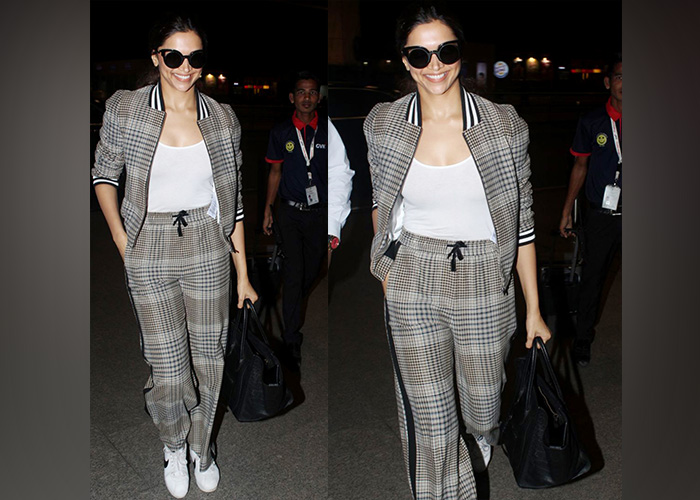 The duo has worked together in the past in ‘Piku’ and despite it being an unconventional on-screen pairing, they were very well received.