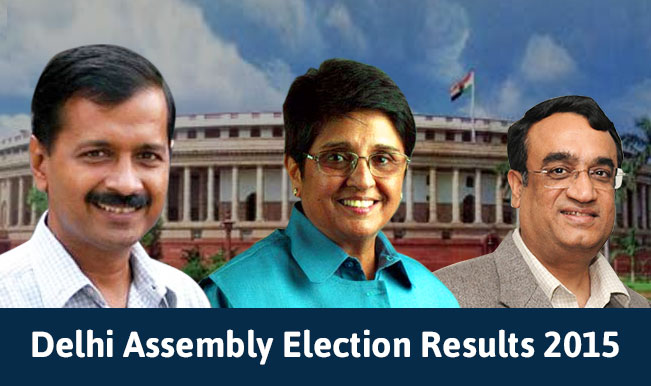 Delhi Assembly Elections 2015 results are coming in from Delhi and the early trends show that the AAP is leading with 59 seats which includes Kastruba Nagar, Bawana and Mehrauli. BJP candidate Vinod Kumar Binny is trailing against AAP candidate Manish Sisodia. While Congress is has failed to get any seats and BJP is leading on 10 seats. Watch the live streaming of election result updates from Delhi on Aaj Tak below. Also Read - ‘200% Confident of Victory’: Suvendu Adhikari Says Will Defeat Mamata Banerjee by Over 50,000 Votes in West Bengal Assembly Elections 2021

Arvind Kejirwal has expressed confidence in raising to power in the national capital. BJP Chief Ministerial candidate Kiran Bedi and Congress’s Ajay Maken said that they will be responsible if they lose this assembly elections. A three-tier security has been placed at all the 14 counting centres Delhi. Fate of three major parties in Delhi will be decided today.

While Exit Polls have declared AAP as the winning party, we have to wait for the results to see which party comes into power. You can watch Live Telecast and Streaming of Delhi Poll Result in the video below.