Is Aamir Khan really Mr Perfectionist? This video will make you think twice about it. For SRK and Salman fans, the video will delight you and arm you with a weapon against your rival-Khan fans’. 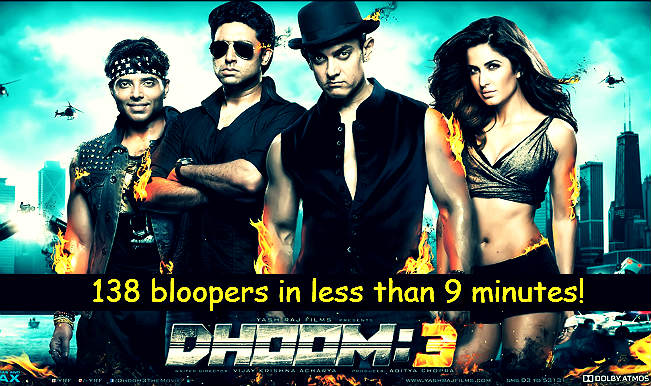 Is Aamir Khan really Mr Perfectionist? This video will make you think twice about it. The third installment of Yash Raj’s Dhoom franchise, Dhoom 3 had over 138 mistakes or as you like to call it bloopers. Can anyone imagine that there were 138 bloopers in an Aamir Khan-starrer movie? Yes. Well lets take a look at it from a different angle. One question that would strike one’s mind is that how come the highest grossing Bollywood film of all time could muster up more than 500 crores with all these blunt errors! Also Read - Faisal Khan On Aamir Khan: How Does Faisal Khan Ever Break Out of Aamir Khan’s Shadow?

Prior to its release Dhoom 3 was ridiculed for many reasons. Some alleged that the motion poster of the movie was inspired (read stolen) by Christopher Nolan’s The Dark Knight, while many argued that the title song- Dhoom Machale, starring Katrina Kaif was inspired by a Jennifer Lopez number. The controversies continued even after the film released. The so-called mind blowing stunt scenes were either rubbed off as frivolous and or they were labeled rubbished, even by the staunch supporters of Mr Perfectionist Aamir Khan. Also Read - #BoycottErosNow Trends Online as Twitterati Express Outrage Over Navratri Post; Company Issues Apology

This 8-minute YouTube video has covered it all; from the first action sequence to the climax, from dialogues to the story line, from costumes to inspired stunt scenes. You will be surprised to know that even a film that is produced by Yash Raj Productions, having A-list star cast, and under the watchful eyes of Aamir Khan could commit so many mistakes in one movie.

There’s still no hope lost, if you are a Aamir Khan fan, if you don’t go by the word watch the video. Be surprised that your favorite superstar despite being called as Mr Perfectionist can commit such silly mistakes. For the Shah Rukh Khan and Salman Khan fans, the video will delight you and arm you with a weapon against your rival-Khan fans’.

Watch the full video below and don’t forget to share it: