Or, is Alia's reaction being hyped by trolls on social media who are calling out Alia for her rudeness?

Bollywood actress Alia Bhatt got mercilessly trolled on Instagram as a video of her apparently speaking rudely to her bodyguard went viral on Thursday. The video was shared by Viral Bhayani and got quickly noticed by Alia fans who did not mince their words to call out the actress for her rude behaviour. Also Read - IIFA Awards 2019: Best Actress Alia Bhatt And Best Actor Ranveer Singh Lead Winners' List of Glitzy Night

In this video, Alia — clad in a white tee teamed with a pair of hotpants — can be seen coming out of a car. Going by the caption of Viral, the video must be of a shooting location. The actress is also carrying a bottle of drinking water. Also Read - Alia Bhatt's Warm Hug to Ranbir Kapoor at Bestie Akanksha Ranjan's Birthday Bash is The Top Bollywood Viral Today

As soon as she got down, photographers shouted her name asking her to look at the cameras. A bodyguard went ahead in an attempt to protect the actress from the prying photo journalists assembled at the spot. But the action, it seems, ticked the actress off as she mumbled in visible indignation, “aap log jaaiye aage” and “aap log chaliye”. Also Read - The Zoya Factor Star Sonam Kapoor Can't Keep Calm as Alia Bhatt-Ranbir Kapoor Spill The Beans on Their Unusual Lucky Charms

Even her rumoured boyfriend actor Ranbir Kapoor was not spared as people compared Alia’s quick-temper with Ranbir Kapoor’s rudeness. 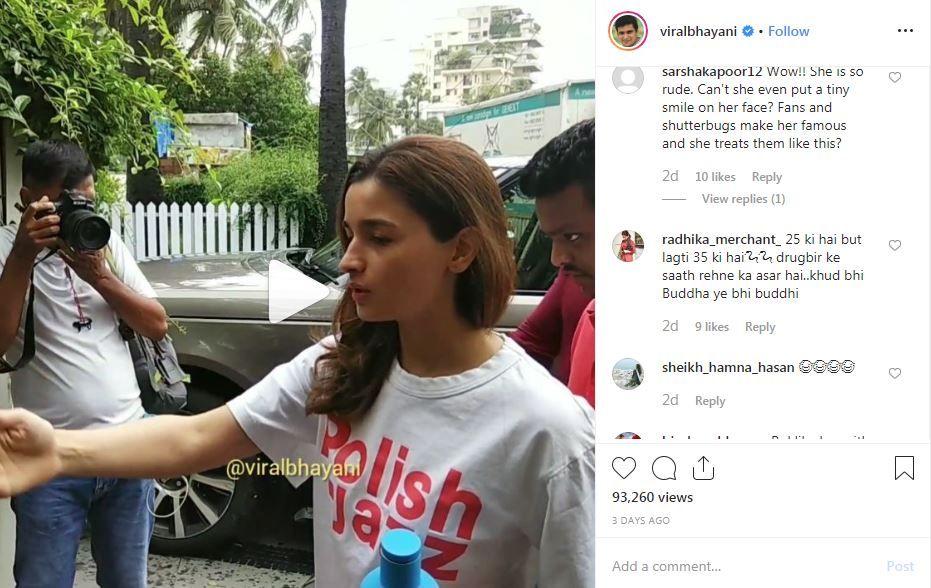 Bollywood actors are often accused of their high-handedness in real life while they appear very friendly on chat shows and interviews. On the other hand, it also raises a debate whether social media has brought the lives of celebrities under 24×7 scrutiny as many believe that it’s not humanly possible to maintain one’s calm and composure in all situations. It’s only natural to get agitated sometimes. But is it justified in a situation like this where the bodyguard has actually not done anything to irk the actress? Or, is Alia’s reaction being hyped by social media? The debate is on.

On the movies front, Alia is busy juggling between RRR, Brahmastra and Takht, all releasing in 2020.