The self-claimed saviour of Indian culture with profound knowledge of sanskar used the filthiest language to assassinate the actress’ character.

Is this the most difficult time for female celebrities on the internet? Well, these rampant harrowing incidents of online trolling confirm our worst fears. Bollywood beauty Disha Patani and a soft target of cyber-bullies once again finds herself under attack on the social media. This time, the 25-year-old Bareilly girl is getting brickbats for wearing a sexy backless jumpsuit at the Varun Dhawan-starrer Judwaa 2 screening. Disha posted the hot picture of a grey outfit on Instagram and within minutes, negative comments began to flood the section. From being compared to ‘porn star’ to aping Western culture, Disha Patani was slut-shamed mercilessly. The actress who will be next seen in Baaghi 2 with actor Tiger Shroff is criticized for flaunting her cleavage and butt in these pictures and ‘destroying the sanskari Indian culture’. Disha Patani slays slut-shamers ridiculing her cleavage-revealing Jio Filmfare Awards dress! Read her powerful post.Also Read - Disha Patani Drops Her Smoking Hot Look In Strapless Pink Bikini, Fans Are Bowled Over

Past few days have been rough for the actresses, be it from India or Pakistan. The social media has gone berserk foul-mouthing against female stars whose only ‘mistake’ is that they are leading a life of their choice. After Pakistani actress, Mahira Khan and Indian model-TV personality, Malaika Arora, it was Baaghi 2 girl Disha Patani who is getting savagely trolled for her wardrobe choice. After Mahira Khan, Malaika Arora Slut-shamed for Wearing ‘Cleavage-Revealing’ Dress. Also Read - Disha Patani Goes Sultry In Halter-Neck Floral Pink Bikini In Latest Boomerang Video | Watch

Disha was seen attending the special screening David Dhawan directed Judwaa 2, starring Varun Dhawan, Jacqueline Fernandez and Taapsee Pannu. Being the fashionista, the Baaghi 2 girl stepped out in style donning a risqué shiny grey jumpsuit. Bringing the sexy back style again in fashion trends, Disha went bold with her blackless jumpsuit being supported by just two tiny straps. She looked ravishing in every sense. But the lovely social media star faced a huge backlash upon posting the sexy snap on Instagram. Deepika Padukone to Disha Patani: 6 actresses who got SLUT-SHAMED for having boyfriends, showing cleavage & what not! Also Read - From Star-Gazing Deck To Artificial Rock Climbing, Rani Mukerji Buys Plush Sea View Home Worth Rs 7.12 Crore In Mumbai

The two-movie-old Disha faced an outrageous amount of hatred for the outfit. While the photo received around 550,000 likes, the comments section is full of cheap and pathetic remarks. The self-claimed saviour of Indian culture with profound knowledge of sanskar used the filthiest language to assassinate the actress’ character. ‘Bitch’, ‘Shameless’, ‘slut’, ‘whore’ were some of the routine comments posted for every female who dares to live life on her terms. And then there were comments giving a graphic description of her body parts and comparing her to adult actress, which will leave you shell-shocked seeing the unbelievable negativity. 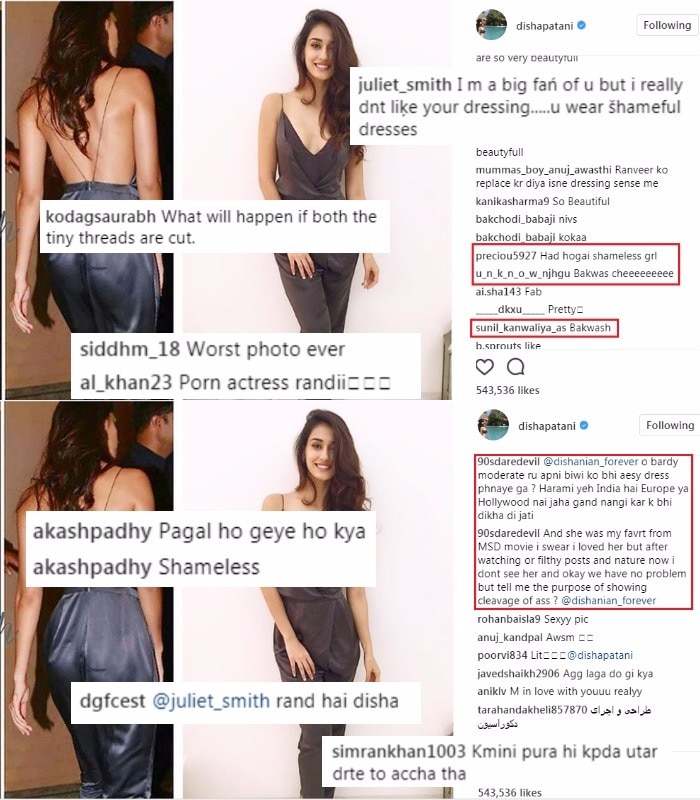 This is not the first time when Disha Patani has been slut-shamed over her outfit choice. The Kung Fu Yoga actress was trolled for donning a cleavage-baring gown to the Jio Filmfare Awards 2016. But the young and confident celeb did not take things lying down. She shot back to shut down her trolls in style with a thoughtful message. 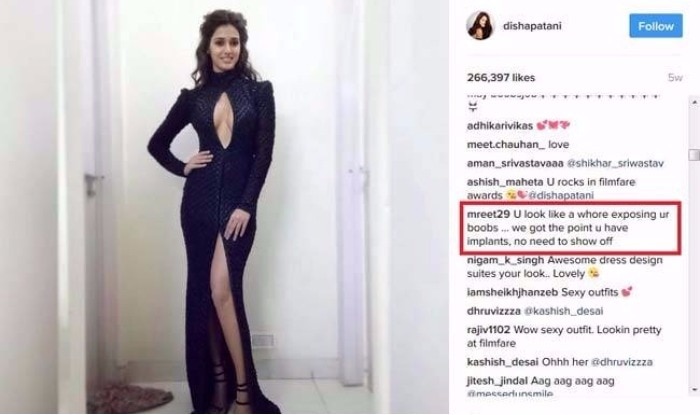 We share Disha’s note to the online trolls once again, “Have been reading so many news lately on molestation and rape! When people in our country are worshipping goddesses what a shame for not being respectable enough to know certain boundaries that make you a human and not an animal! It’s easier to judge a woman on the basis of how much they cover up their skin, but it’s hard to accept your own cheap mentality where you can’t stop staring at those inappropriate areas which you are asking her to cover! Wake up and start accepting that we are not going to be anybody’s idea of an “indian girl” don’t let your frustration destroy somebody’s life because you won’t be happy if it happens in your own family! Stop this hypocrisy and open your mind! (sic).” Disha’s fans would be awaiting a similar strong comeback from their favourite star.