Disha Patani's Breezy Look at Her Mini Vacation is Giving us Travel Goals.

Bollywood actor Disha Patani has jetted-off for a mini-vacation with her girl gang. Earlier today, she took to Instagram to share her couple of pictures from her short holiday. In the photos, she can be seen donning a yellow crop top teamed up with a floral pink palazzo. With subtle makeup and a dash of lipstick, she looks hot as she flaunts her midriff abs.Also Read - Disha Patani Welcomes Winter in a Hot Candy Pink Jacket- See Pics

She completed her look with white sneakers and a matching sling bag. The photos are going viral on the internet and have fetched over two lakh likes within a couple of minutes. Also Read - Disha Patani Looks Hot in Sexy Black Sports Bra And Red Briefs as She Strikes Sultry Pose, Picture Goes Viral

Though, she is just a few films old, she has gained immense popularity, thanks to her social media presence. She is also an inspiration to many girls when it comes to fitness and following the latest trends. Also Read - Disha Patani is Giving Out 'Green Vibes' in Sexy Top And Black Hot Pants in Latest Mirror Selfie 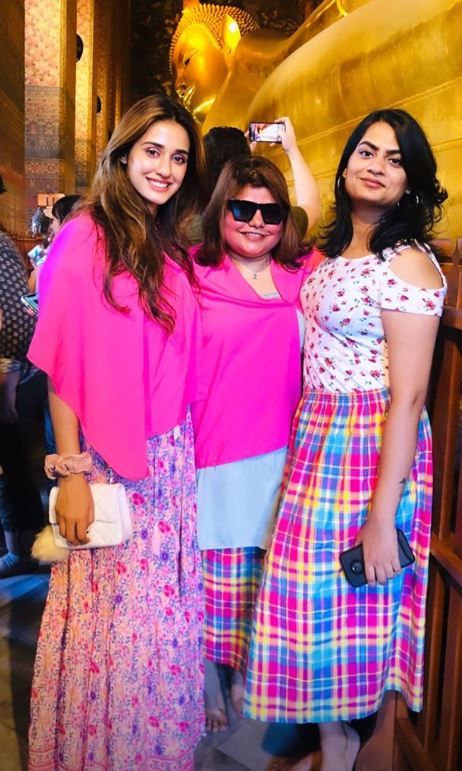 Earlier, she has set the internet on fire with her latest look in a black sports bra and sexy red briefs teamed up with denim. With hair styled in loose curls, she completed her look with bronze makeup, kohl in eyes and nude lipstick. Striking a sultry pose, she looks hot, as always.

On the work front, Disha Patani is currently busy shooting for her upcoming film Malang. It is a romantic thriller film directed by Mohit Suri, also starring Aditya Roy Kapur, Anil Kapoor, and Kunal Khemu. It is co-produced by Luv Films and T-Series. The film will also have Mohit Suri and Kunal Khemu coming together post the actor’s debut film – Kalyug. It is expected to release in 2020. She has also been roped for Salman Khan’s film Radhe: Your Most Wanted Bhai. The film will be produced by Sohail Khan, directed by Prabhdheva and Reel Life Productions under the banner of Salman Khan Films.