The talks over Disha Patani’s bold cleavage-revealing black dress which the actress wore at Jio Filmfare Awards 2017 is refusing to die out. Her black Nicolas Jebran gown has become the biggest topic of the debate after pictures and videos of a guy sitting next was caught on camera ogling at Disha Patani’s cleavage. This incident has led to groups of slut-shamers sitting idle on the social media to ridicule Patani’s choice of bold outfit. But the young superstar in the making knows how to take a stand for herself and burned the misogynistic hypocrites who posted a derogatory comment on her Instagram picture. MS Dhoni: The Untold Story actress Disha Patani posted a powerful note and slaying the world in the process. Monali Thakur shuts down troll who commented on her short dress in Instagram picture. Also Read - Want a Bikini Body Like Disha Patani? Try This Summer Diet to Achieve it in Just 6 Easy Steps

Disha Patani is one of the most-talked actresses in Bollywood. She is a gorgeous 24-year-old with a perfect combination of cute face and desirable hot body. She has given back to back memorable films MS Dhoni: The Untold Story and Kung Fu Yoga and enjoys her success to the fullest like any youngster. Disha Patani is smashing up the popularity chart with a massive fan following, and she took the country by storm when she attended Jio Filmfare Awards 2017 wearing a black Nicolas Jebran dress. Tiger Shroff’s alleged girlfriend, Disha Patani’s, looked stunning in the black dress. But there have to be narrow-minded misogynistic creeps who instead of taking care of their gutter brains, turn into self-proclaimed moral police. Also Read - Disha Patani is Winning Hearts As She Goes All ROFL in Latest Video, It Will Make You Laugh Hard Too | WATCH

The pleasant-looking actress posted a picture of Filmfare Awards 2017 dress on her Instagram account. Disha Patani’s black dress boasted of plunging neckline giving an ample view of her cleavage. This certainly did not go down with many of ‘righteous’ hypocrites and started puking nasty comments below the picture post. Filmfare Awards 2017: Disha Patani, Kriti Sanon, among the ditzy divas who went Bold with Black on the red carpet! Also Read - Disha Patani Flaunts Her Washboard Abs As She Works Out From Home| See Pics 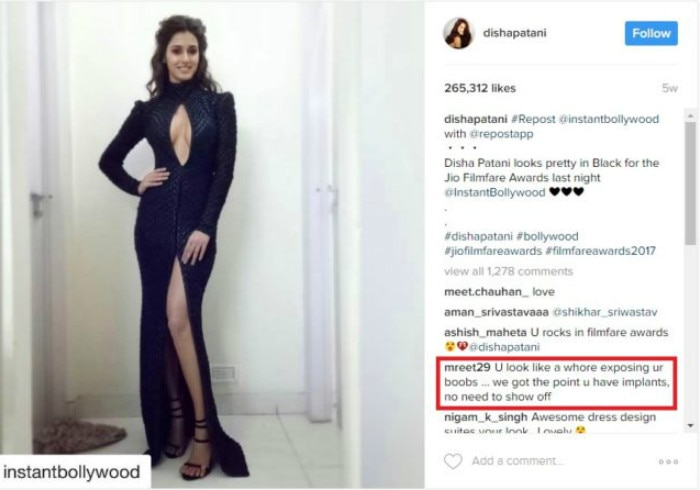 One of the users posted an offensive remark, calling her ‘whore’ and telling her of getting breast implants. Well, Disha certainly had enough of the negativity and cheap thoughts. She penned down a powerful post for all the slut-shamers out there.

Really felt a need to share this! 🙏🏻 thanks to my fan clubs friends and family for always giving me the strength i hope we all can find this strength from within each other and stop suffering 🙏🏻 #spreadlove

Disha Patani’s post read: “Have been reading so many news lately on molestation and rape! When people in our country are worshiping goddesses what a shame for not being respectful enough to know certain boundaries that make you a human and not an animal! It’s easier to judge a woman on the basis of how much they cover up their skin, but it’s hard to accept your own cheap mentality where you can’t stop staring at those inappropriate areas which you are asking her to cover! Wake up and start accepting that we are not going to be anybody’s idea of an “Indian girl”. Don’t let your frustration destroy somebody’s life because you won’t be happy if it happens in your own family! Stop this hypocrisy and open your mind!” Well said, Disha Patani. Never change girl!