Diwali 2016 Date & Significance: When is Diwali? Why is Diwali Celebrated? What is Festival of Lights?

Diwali – is popularly also known as Deepavali, the festival of lights is just a few days away! This festival is celebrated all around the globe with lot of zeal and enthusiasm. Diwali is one of the most famous festivals of the year. The festival of lights will soon begin from 26th October, 2016. Diwali is basically a five days celebrated festival which begins from Dhanteras, Naraka Chaturdasi, Padva and ends on Bhai Dooj day. Diwali festival signifies the victory of light over darkness. Diwali festival occurs on the thirteenth lunar day of Krishna Paksha of the Hindu calendar month of Ashwin each year. And on this day, people light up diyas and perform puja’s at their place so that Goddess Lakshmi grants them with happiness and prosperity. Women draw rangolis, light lamps and even exchange sweets with their dear ones. ALSO READ: Diwali Rangoli Designs: How to Make Easy & Colourful Diwali Rangoli Designs and PatternsAlso Read - Sara Ali Khan Poses With Ibrahim Ali Khan in Bhai Dooj-Special Pics, Duo Looks Royal in Abu Jani-Sandeep Khosla Outfits

The word ‘Diwali‘ is derived from Sanskrit word “Deepavali” which means “a series of lights”.  Deep means light and avail means series. According to religious significance, Diwali is celebrated in honor of God Rama, his wife Sita and his brother Lakshmana returning back from exile of 14 years. Whereas some say that Diwali marks the return of Pandavas after 12 years of Vanvas and one year of agyatavas in the other ancient Hindu epic Mahabharata. The festival is celebrated with fervor and lot of joy, happiness. As we all know, that Lord Rama returned to his hometown after the vanquishing of King Ravana of Lanka. It is said that when Lord Rama, Goddess Sita and Rama’s brother returned to Ayodhya, the people of that estate had lit the entire state with lamps and had a grand welcome ceremony. It is said that it was the beginning of a new era of happiness and peace in the Ayodha. ALSO READ: Diwali Laxmi Puja 2016 Date & Significance: When is Lakshmi Puja? Why Laxmi Pujan is done during Diwali Festival? Also Read - Despite Coronavirus Effect, Gold Continues to Shine in Mumbai on Dhanteras

People all over India celebrate this festival with zeal and enthusiasm. On this days Goddess Lakshmi and other Gods are been worshiped. Diwali Puja signifies the most traditional worship of Hindu deity Goddess Lakshmi and Goddess Saraswati. The most auspicious time to perform Diwali Puja is after sunset which is known as Pradosh. We have shared Diwali 2016 Calendar along with dates & significance. Happy Diwali to everyone out there and we hope God fulfill all your wishes in terms of wealth, health and happiness in your life. ALSO READ: Diwali Recipes: Celebrate Diwali 2016 With these Easy-to-make Sweets and Snacks Recipes 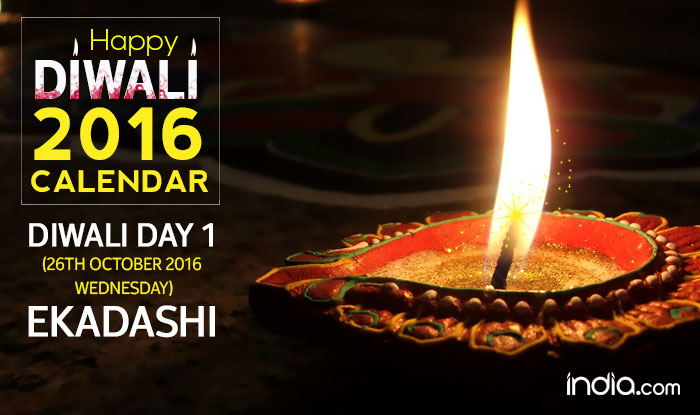 Ekadashi festival is considered as a spiritually beneficial day and consists of rigorous fast. On this day devotees are not suppose to consume beans and grains during Ekadasi. They can have fruits, vegetables and milk products. Ekadasi ocaasion is dedicated to Lord Vishnu and devotees worship him to get themselves blessed. 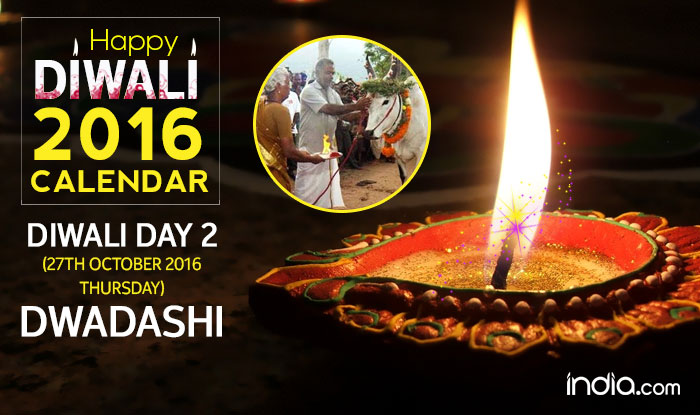 Dwadashi also known as Dvadasi or Dwadasi is the twelfth lunar day which falls on the fortnight of every lunar month in the Hindu calendar. On this day devotees worship the sacred Tulsi tree and Lord Vishnu. The saint poet Annamacharya died on Phalguna Bahula Dwadasi in the year Dhundhubhi. This festival is similar to Ekadashi and devotees celebrate this day with great devotion. 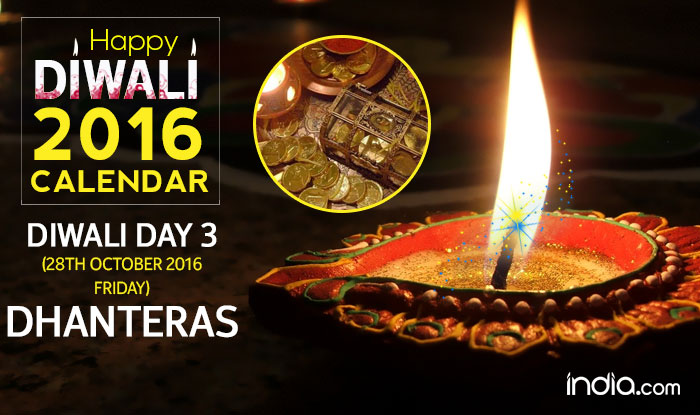 Dhanteras is the first day of the Diwali festival in India that usually falls one or two days before Lakshmi Puja – the main Diwali day. This festival is also known as Dhanatrayodashi or Chhoti Diwali. The word Dhanteras itself means wealth and prosperity. It falls in the month of Ashwin, and is celebrated on the13th Lunar day according to the Hindu calendar. The day holds special significance for businessmen who purchase gold on the day. But generally everyone chooses Dhanteras to invest in gold bars or jewellery. New clothes and utensils for Diwali are also bought on this auspicious occasion. ALSO READ: Dhanteras 2016 Date & Significance: When is Dhanteras? Why Dhantrayodashi is celebrated during Diwali?

The story is all about 16-year-old son of King Hima whose horoscope predicted his death by snake-bite on the fourth day of his marriage. The whole day his wife didn’t allow him to sleep and laid out all her precious ornaments in a basket and kept it near the entrance with lit lamps all around it. Her wife kept on singing songs so that her husband doesn’t fall asleep. 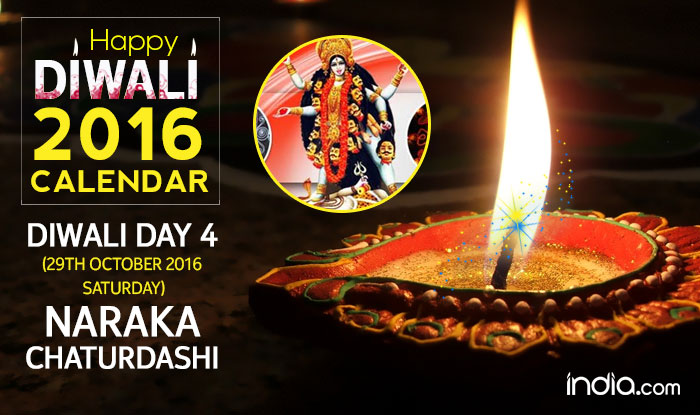 Naraka Chaturdashi, the Hindu festival which falls on the second day of Diwali has great significance people simply believe that who performs this ritual can avoid going to Narak (Hell). It falls on the next day of Dhanteras. Oil bath or Ubtan is another importance of this occasion. It is always done during moonrise but before the sunrises.

According to Hinduism, this festival is celebrated on the 14th day of the half dark moon and the whole day is allotted in worshipping Mahakali or Goddess Shakti. People believe that on that day, Kali killed the most evil demon Narakasura. The festival is all about dissolving the bad and protecting others like Goddess Kali did. 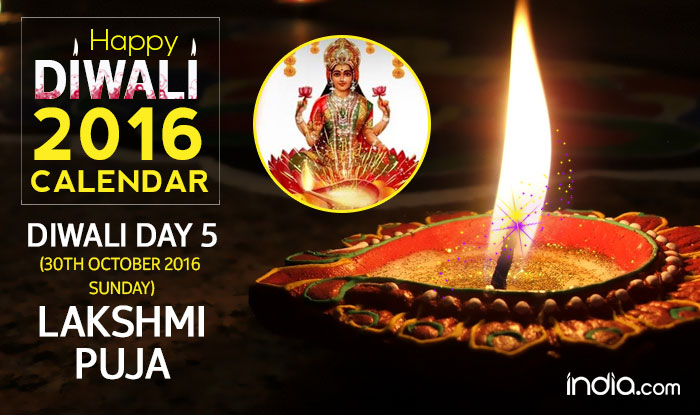 Lakshmi Puja is yet another Hindu prayer which is performed on the third day of Diwali. This is very important and entirely devoted in worshipping Goddess Lakshmi. People start decorating their homes well in advance and light diyas and pray for wealth, prosperity and happiness of their loved ones. The occasion falls on the day of Amavasya which is normally termed as inauspicious day, but here it is regarded as the most auspicious one. ALSO READ: Diwali Laxmi Puja 2016 Date & Significance: When is Lakshmi Puja? Why Laxmi Pujan is done during Diwali Festival?

According to the mythological myth, Goddess Lakshmi is god of wealth and beauty. She is also the wife of Lord Vishnu and bhakts offer gifts and grants for her auspicious blessings. People also think that the happier Goddess will be, the more she will grant her blessings on them. This day is the main event of Diwali and it’s extremely important to keep the house clean and tidy. As it is said that, Goddess visits and likes cleanliness. Lakshmi Puja is performed especially by women and business men and is also believed that Goddess visits and grants lot of wealth on the night of Diwali. 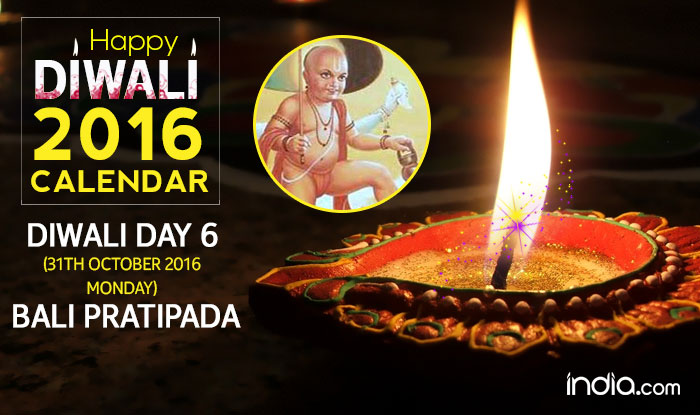 Bali Pratipada festival takes place on the third day of Diwali and is celebrated with zeal and enthusiasm of the demon who returned to earth – King Bali. According to Hindus, Bali Pratipada is regarded as the victory of Lord Vishnu in his Vamana and defeating Bali. But unluckily, Bali was granted a boon by Lord Vishnu that he could return to Earth just for one day and celebrated in the honor of devoting Lord and for his deeds. Bali Pujan is performed to seek the blessings of King demon and is believed that Bali resides on Earth for three days and grants his blessings.

There is a myth which is followed, that the image of King Bali along with his soul mate Vindhyavali must be drawn at the centre of the house with five different shades of colours. It is also said that during Bali’s regime, people used to never lock their homes and there was nothing like thieves existed. 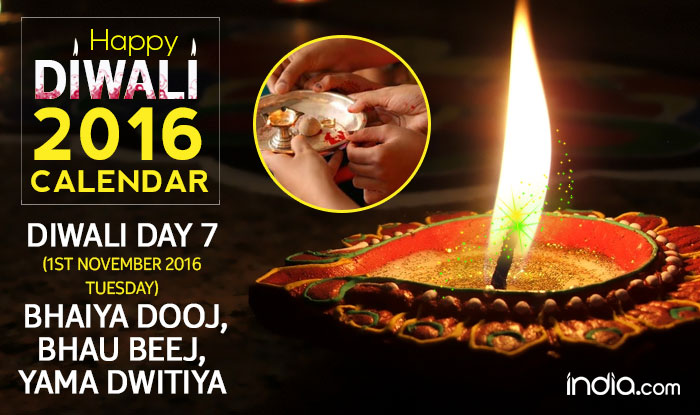 Bhai Dooj, Bhaiya Dooj or Bhau Beej is usually the fifth day of Diwali and marks the end of the auspicious festival. This festival is celebrated by Hindus and is similar to Raksha Bandhan. Bhai Dooj is a day when sisters pray for their brothers and apply tilak on their foreheads, and the siblings and cousins exchange gifts. ALSO READ: Bhai Dooj 2016 Date & Significance: When is Bhaaubeej? Why Bhaiya Dooj is Celebrated?

According to Hindu mythology, Bhai Dooj is celebrated because of the significance of the slaying of Narkasur demon. It is said that Lord Krishna visited his sister Subhadra who welcomed him and applied tilak on his forehead. People say from that time celebrating this festival came into existence. Another story goes that this day is celebrated for the legend Lord Yama. The God of Death visits his sister Yami and she puts tilak on his forehead. This mark signifies that her brother will always be there to protect her and his sister will always be there to pray for him. 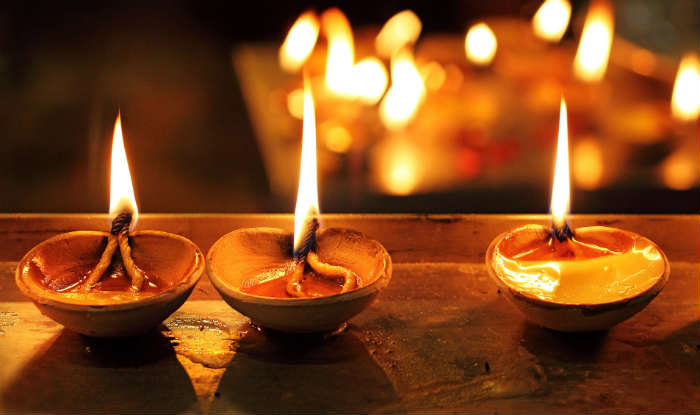 On the eve of Diwali, people welcome a new ray of hope into their lives and try to remove all negative thoughts from their life’s. Even before Diwali actually starts, people clean their home and lit their houses with clay diyas or electric lamps. Even on this auspicious day, children burn firecrackers and enjoy the festival. Dhanteras is one of the most important day before Diwali. On this day, people buy new cloths, jewelry. The last day of Diwali is – Bhai dooj which is celebrated.

On the day of Lakshmi Pujan, People purchase clothes and gold ornaments. People start a new day by distributing sweets, food with their dear ones. On the night of Diwali, devotees worship Lord Ganesha and Goddess Lakshmi. Dhanteras is the first day of the Diwali festival which is celebrated with lot of enthusiasm and energy. People in India are celebrating the festival of buying gold, silver today. Dhanteras usually falls before Lakshmi Puja which is the main day of Diwali festival. This festival is also known as Dhanatrayodashi or Chhoti Diwali. Dhanteras itself means wealth and prosperity and it falls in the month of Ashwin. The occasion falls on the 13th Lunar day according to the Hindu calendar.

Naraka Chaturdashi, the Hindu festival which falls on the second day of Diwali has great significance people simply believe that who performs this ritual can avoid going to Narak (Hell). It falls on the next day of Dhanteras. Oil bath or Ubtan is another importance of this occasion. It is always done during moonrise but before the sunrises. According to Hinduism, this festival is celebrated on the 14th day of the half dark moon and the whole day is allotted in worshipping Mahakali or Goddess Shakti.

What is Festival of Lights: 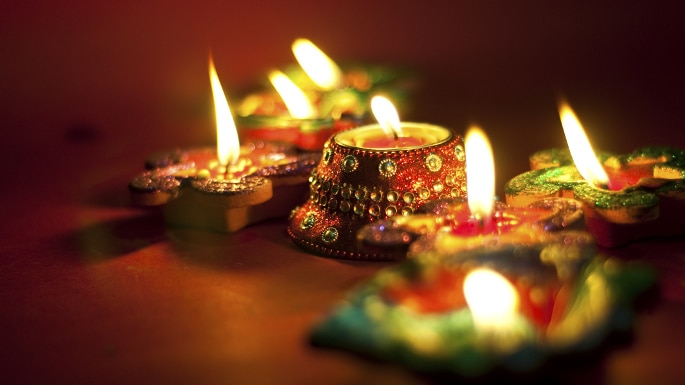 We often say that Diwali is a festival of lights, but have we ever thought WHY? The actual reason behind saying that Diwali is known as the festival of Lights has evolved from a small story. During the time of Lord Rama, who was the avatar of Supreme Protector Lord Vishnu. He was even the the king of Ayodhya who left his royal luxurious life because of his father’s orders and went to forest for 14 years. The people of Ayodha were quiet sad and unhappy they waited for many years to meet Lord Rama again. So, when finally Lord Rama returned back to Ayodha , in the honor of their king the entire Ayodha celebrated his victory and decorated the entire city. The people lit up their houses with diyas.