Diwali Image Of Indian Map Taken From NASA Satellite Is Fake: The Famous Glowing Photo Of Map Of India Is Back

Every year a colourful picture of India as taken from a NASA satellite is circulated on the social networks and people usually believe its authenticity and share it. Needless to say, the picture is a fake.

Diwali, the Festival of Lights is one of the most popular and avidly celebrated festivals of India but every year it gets mixed with controversy regarding the use of firecrackers and the pollution it causes. This year, the bursting of firecrackers has been banned in Delhi. However, every year a colourful picture of India as taken from NASA satellite is circulated on the social networks and people usually believe its authenticity and share it. Needless to say, the picture depicting the Indian map is back. However, the picture is a fake and it is not from a Diwali night. Fireworks, the lighting of lamps and diyas, candles, bulbs, decorative lamps are an integral part of the celebration of Diwali. However, NASA has finally answered that the lights produced during Diwali celebrations cannot be viewed from space.Also Read - NASA Launches 12-Year-Long Mission Lucy to Explore Solar System Origin, Trojan Asteroids. All You Need to Know

According to NASA, any extra light produced during Diwali is so minuscule that it cannot be captured from space. The fake image of India that gets circulated every year repeatedly on social networking sites and other internet websites is actually from the US Defense Meteorological Satellite Program (DMSP) satellites. It was actually a series of photographs and data that was collected over many years to highlight the population growth over time. The photograph was created by NOAA. The white areas in the photograph show city lights that were visible before 1992. The blue, green and red lights show city lights that appeared in 1992, 1998 and 2003 respectively. Real Picture Of India On Diwali Seen From Space Is Shared By Astronaut Paolo Nespoli Also Read - Rajasthan Revises Order; Allows Sale, Bursting Of Green Crackers With Restricted Timings 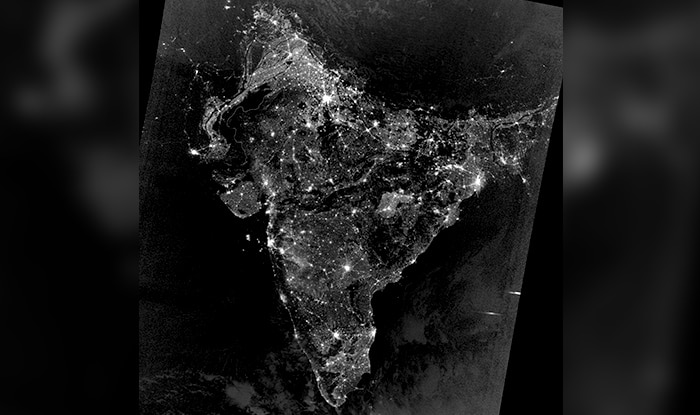 The image is a colour-composite created in 2003 by NOAA scientist Chris Elvidge to highlight the population growth over time and is not a Diwali photograph which it is generally believed to be and labeled as. The real picture of India from space on a Diwali night was a black-and-white photo taken on November 12, 2012, by the Visible Infrared Imaging Radiometer Suite (VIIRS) on the Suomi NPP satellite. This picture shows a collective nighttime vision of southern Asia and is created with the help of VIIRS that collected data in the day-night band. The image under circulation has been brightened to identify the big cities and towns of India, Pakistan, Nepal, and Bangladesh which appears the brightest. Also Read - NASA to Launch First 'Lucy' Mission to Distant Asteroids on Oct 16 | Details Inside