Do you know why the popular dance form of Navratri is called ‘Garba’?

Where did it derive it's name from?

It’s Navratri and everyone is busy with the pujas, the celebrations, dressing up or dancing their hearts out in the evenings. But in the middle of all this, we often forget to understand and know the reason behind our customs and traditions. Navratri is celebrated in not just one state. While it’s Durga Puja in West Bengal, it’s Navratri in Gujarat and in South India, it’s the tradition of Golu that’s celebrated. We are all aware of Durga Puja and that it is a celebration of good over evil, of the fight of Maa Durga against Mahishasura. But then, people of each and every culture play the Garba and Dandiya, the dance forms of Gujarat. How many of you know why exactly is the Garba and Dandiya played? Or why is a Garba even called a Garba? Have you ever wondered? Any answers?Also Read - Puri-Based Miniature Artist Makes Goddess Durga Idol With 275 Ice-Cream Sticks

Unlike in West Bengal, in Gujarat and parts of Maharashtra, Navratri is celebrated with a ‘Garbo’. A Garbo, as it is called is an earthen pot with holes in it that is placed in a holy part of the house and worshipped daily. There is also a small earthen lamp lit and placed inside the pot.  While some leave the lamp burning constantly for all 9 nine days, other light it only during the auspicious hours in the day.  The Garbo is sometimes decorated with beads, decorative cloth pieces, glass, etc and at times it is simple and plain without any adornments. Just like during Durga Puja a statue of Goddess is brought home, those celebrating Navratri in parts of Western India bring home the Garbo. Garbo stands for Mata Amba or Jagdamba (another name for Durga) as she is worshipped in Western India. But why is she called Garbo? And why a pot? Also Read - Viral Video: Girls Perform Garba in PPE Kits During Navratri to Raise COVID Awareness | Watch

[Read More: 10 Forms of Shakti that are worshipped during Navratri] Also Read - Dussehra 2021: Date, History Significance, And Everything You Need to Know

The earthen pot or Garbo signifies the womb. It is literally derived from Garbha, the sanskrit word for womb. Amba Mata or Ambe Maa is a woman and the protector of the world. She protects her children from the wrath of the outside world and stands up for her children just like every mother does. The light inside is symbolic of a baby inside the womb. It is a respect to every woman, especially mothers. It honours Durga, in all her feminine glory. The womb is also the giver of life, where the body is firs born and takes shape. It is also respecting every individual and their body, which holds the power within itself.

The dance form played during Navratri is called Garba and named after Garbo. Traditionally, the dancers form a circle and the Garbo is placed in between the circle. The dancers then dance around in gentle but enthusiastic movements. The dance movements are derived from spiritual movements and are very similar to those of the Sufi culture. Dancing the Garba is that the womb is present inside the individual. The womb symbolises the entire body and through the dance form, the dancers worship and channelise the divinity present within themselves. It is a symbol that all humans have divine energy and the power is present inside everyone, however big or small, successful or unknown, rich or poor. It bridges the divide and brings everyone together.

[Read More: Why is the soil from outside a prostitute’s home used during Durga Puja?] 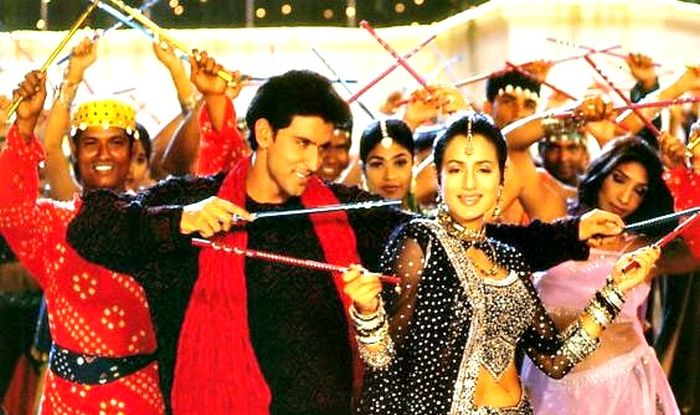 Dandiya is another type of dance that is extremely popular during Navratri. Unlike everything in Navratri associated with Durga, Dandiya is actually associated with Krishna. It is Dandiya Raas, one of the Rass Lila’s Krishna was so famed for. While in Gujarat Dandiya is played with 2 sticks and men and women in concentric circles, in Rajasthan there’s another type of dance called Dang lila which is very similar to Dandiya but played with only 1 stick. They are both forms of Krishna’s Raas Lila and derived from the original sanskrit word Rasa meaning the mental state or emotion evoked through an art form.

Dandiya is actually known as “The Sword Dance”. It is the staging of the fight between Maa Durga and Mahishasura through vigorous dance and steps. The dandiya sticks are symbols of the swords used by the two during their duel. The musical background instruments like Dhol and Percussions are symbolic of the metallic clangs on battlefields. The movements of Dandiya are a lot more complex and intricate than those of Garba. While Garba signifies the birth of life, Dandiya signifies the destruction of evil. Both go hand in hand and the Navratri Puja is considered incomplete without one of the two.

While Garba is played in the beginning and before the aarti, Dandiya comes after the aarti as part of enjoyment and the end. The steps to garba are soothing and so are the songs while the Dandiya songs have a lot more beats and energy. Both are odes to Ma Durga, one in her tender, gentle loving form as the mother of the universe and the other as a fierce warrior, the destructor of all evil.