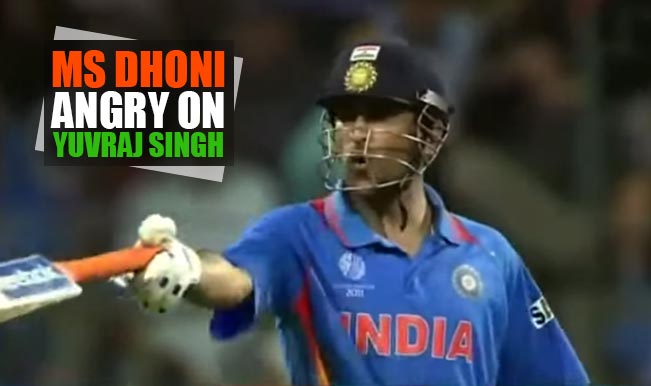 India won a scintillating final against Sri Lanka at Wanhkede Stadium  in World Cup, four years ago in 2011. It was Gautam Gambhir’s master-class and Mahendra Singh Dhoni’s cool that saw India won the World Cup after a hiatus of 28 years. Captain Cool Dhoni’s move of coming ahead of in-form Yuvraj Singh in the final surprised millions, but it paid off. In a crucial match that saw India successfully chase the target in crunch situations, there were scenes which didn’t catch the eye of a Indian Cricket Fan. (Also watch: Childhood Pics of Cricketers: How Virat Kohli, Sachin Tendulkar, MS Dhoni & other IPL stars looked as kids!) Also Read - IND vs AUS: Ravindra Jadeja Overtakes MS Dhoni to Register Highest T20I score For India at no. 7

MS Dhoni , who is known to remain cool in such pressure situations, lost his cool on his one time close friend- Yuvraj Singh. Dhoni’s friendship with Yuvraj was one of the talking points in the bygone era of cricket. The duo complemented each other very well in Dhoni’s early days. For a very limited period of time, India had found a batting pair in the middle order to rely upon. (Also read: Yograj Singh vents anger against MS Dhoni, gets trolled on Twitter for threatening to SLAP Captain Cool!) Also Read - Cyclone Burevi: Public Holiday Declared in 5 Districts of Kerala, Several Flights Cancelled

However, the chemistry between the two didn’t sustain for a longer period, as cracks appeared between them soon after the south-paw lost his midas touch. Watch the shocking video of an rare instance, where Captain Charisma MS Dhoni lost his temper on team-mate Yuvraj Singh, below