Ivanka Trump wears a sherwani by Anita Dongre and that irks the followers of the designer who think that she should not have let someone who's known for 'promoting nepotism and fascism' wear her creations.

The US President, Donald Trump is currently in India for a two-day visit along with his wife, Melania Trump and daughter, Ivanka Trump. The first daughter of the US wore a handwoven sherwani suit during one of her appearances on Tuesday, February 25. Designer Anita Dongre created the sherwani and also advertised about it on her Instagram handle by posting a picture of Ivanka posing in her ‘suruhi sherwani.‘ This, however, didn’t go down well with her followers on social media. Also Read - 'Honoured to Return to India,' Tweets Ivanka Trump Ahead of Donald Trump's Two-Day State Visit

As soon as Anita posted Ivanka’s picture on Instagram, several users began to criticise her for dressing up someone whose father is known for making contentious policies and sexist statements all across the world. Dongre is famous for promoting Indian textiles in her designs, introducing local artwork and encouraging Indian craftsmanship through her creations. Her brand stands for women empowerment and many celebrities swear by the quality of her products including Deepika Padukone, Sonakshi Sinha, Dia Mirza, Kajol, Katrina Kaif, Kangana Ranaut, Madhuri Dixit, Priyanka Chopra and Shraddha Kapoor among others. The Instagram users pointed out at the very essence and intention of the brand while slamming the designer for using Ivanka to promote the brand.

One user wrote, “Not you Anita, not you. You’ve done so much for women of substance- she isn’t one of them” (sic), while another wrote, “There is no question what a dangerous and monstrous administration and family this is. To not only dress them but to advertise it as if they are legitimate and worthy is so beyond disappointing and tone deaf. I’ll spend my time and money with brands who have integrity and care about humanity” (sic). Another user wrote, “So disappointed that a brand celebrating diversity is dressing someone who stands for the opposite” (sic). One comment read, “So disappointing to see you supporting nepotism, fascism, and the dangers of being complicit towards power abuse. You should be ashamed of yourself” (sic). Check this out: 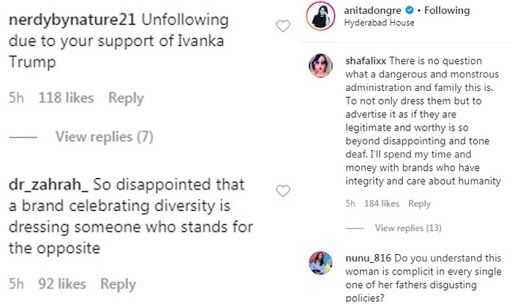 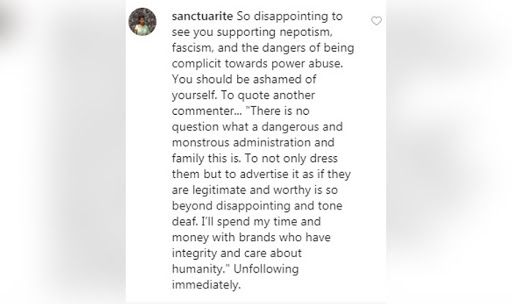 Ivanka has been at the receiving end of people for being present at her father’s official meetings and bragging about it through her social media posts. In February 2017, she faced a lot of trolling after posting a picture of herself seated in the chair meant for the elected President of the US. Many Twitter users pointed out that it was ‘inappropriate’ for her to be present at those official meetings with her father let alone be seated in the President’s chair. Check this out: 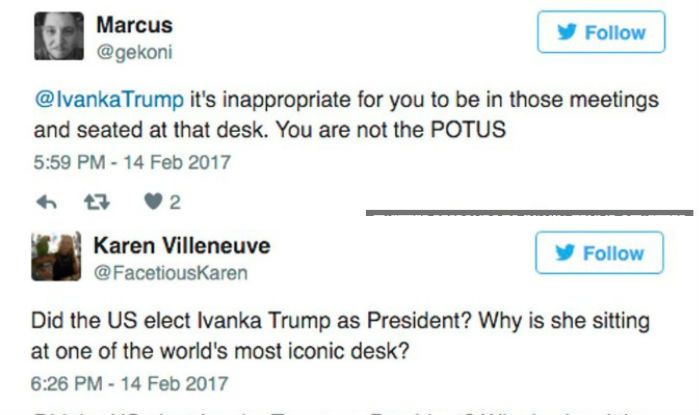 During their two-day visit, the Trumps visited Ahmedabad, Agra (Taj Mahal) and Delhi. What do you think about this whole controversy around Ivanka wearing Anita Dongre?