Who dares to call Editor-in-chief of a channel, “Your management must be ashamed of you now!” Well, Subramanian Swamy just did that, in some style. 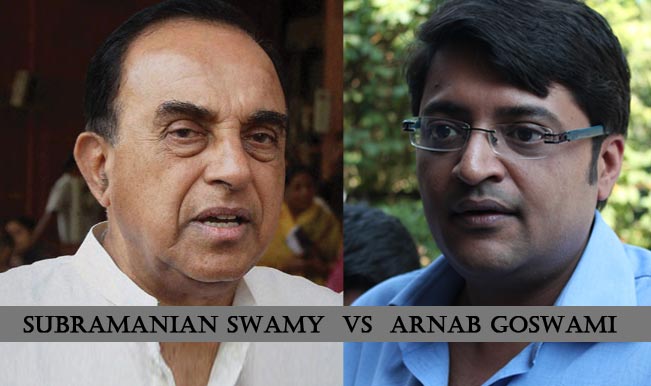 Arnab Goswami and facts, seems a contradiction right? No one other than Dr Subramanian Swamy could give it back to the Editor-in-chief and news anchor of Times Now, Arnab Goswami. The self-proclaimed factually right journalist was at the receiving end from the senior Bharatiya Janata Party leader (BJP) leader when he argued over a letter written by Dr Swamy to Sri Lankan President Mahinda Rajapaksha. (Also read: Dr Subramanian Swamy vs Arnab Goswami II: Interrupception by Parodesy Noise will leave you ROFL!) Also Read - BJP MLA Nimaben Acharya Becomes First Woman Speaker of Gujarat Legislative Assembly

Who would expect to hear such things on a live prime time show on India’s leading English News channel? Even Arnab Goswami wouldn’t have expected that he would be subjected to such remarks. “You’re a laughing stock of this broadcasting world, with the amount of lies you tell. You’re ashamed of yourself now. You are asking a question, you liar? You are such a dumbo! Mentally retarded you are,” are some of the remarks Goswami heard on his own show, on his own channel, by none other than Dr Subramanian Swamy. Also Read - BJP Demands Imposition of Section 144 in Bhawanipore After Dilip Ghosh Manhandled; EC Seeks Report | Key Updates

Every viewer of the Times Now’s prime time show Newshour knows that Goswami bosses his panellists and interrupts when it is least needed. Leave about interrupting a panellist, stuffing words in the mouth of the participant seems to be his favourite hobby. After having had enough from Goswami, Dr Subramanian Swamy unleashed a series of verbal volleys that Arnab wouldn’t be able to forget in his entire lifetime.

The show was on the subject Sri Lankan government issuing death sentences for the 5 Tamil fishermen who crossed the international lines. #IsSwamyRight was the topic started by Times Now on social networking site Twitter. It not only became the top trend, but almost every tweet had content which backfired badly on the TV news channel.

Now who dares to call the Editor-in-chief of a news channel and the anchor of a show, “Your management must be ashamed of you now!” Well, Dr Subramanian Swamy just did that, in some style.

Whatever you read above can’t even be called a snippet of the entire show. To watch the full video of the verbal volleys scroll down to watch the entire video below: