Man gets drunk on robbing duty, CCTV camera shows an unusual scene of him leaving behind stolen cash and booze in a restaurant

Either the restaurant owners were lucky or in for a good laugh amid the COVID-19 pandemic woes as a robber got so intoxicated on alcohol that he left behind all the stolen money and booze at the food joint. The incident took place on July 11 in the US state of Alabama where the CCTV camera recorded the unusually hilarious scene of a crime activity-turned-comedy. Also Read - Pilot Assaulted in Mumbai Over Vehicle Parking Issue; Three Booked

Taking to his Facebook handle, Jeremy Conception, one of the restaurant’s partners, shared the surveillance footage of the burglar with a humourous caption. He wrote, “Some Pirates broke in last night and stole all of our Booty in the register and some RUM! NOT THE RUM!!! Thankfully nobody was here, what was lost will be earned back. They at least respected the mask policy If anyone has any information on a couple of dudes with what looks like matching leg tattoos (#friendgoals), please let us know! We know times are hard guys, WE KNOW, so if y’all Pirates see this, at least spend it at your favorite local joint, leave us a review if the rum was good. #wegunnafindyou #runandtellthat #homeboy #downtownhsv #huntsville #ihearthsv #phatsammys #pirates #piratelife #scallywags #scarvy #surrenderthebooty #bööty @ Huntsville, Alabama (sic)” Also Read - Tamil Nadu: Truck Carrying Mi Mobile Phones Worth Rs 15 Crore Robbed 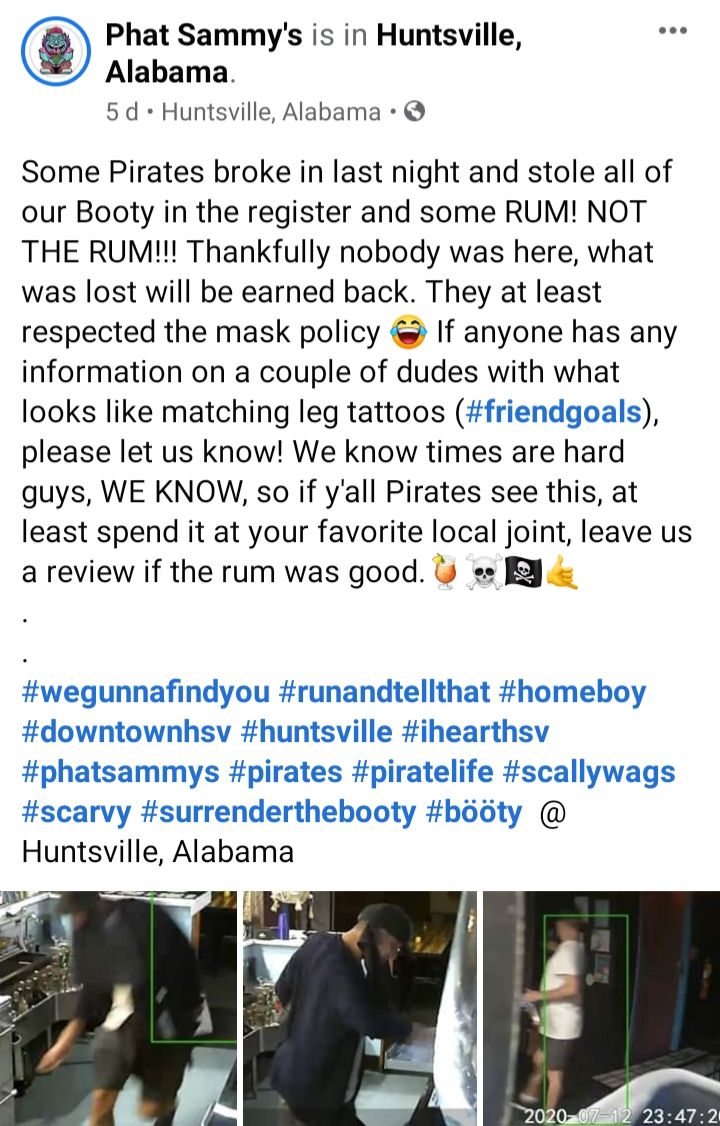 According to a report in WAAY31, the thief wore a mask and entered the restaurant in Huntsville, Alabama while it was closed. He got drunk on duty while attempting to steal money as he popped opened bottles of alcohol and drank too much. In an interview with the news agency, Jeremy shared that the thief left behind some of the stolen money and booze as he became “spooked”.

Jeremy said, “He (the robber) finds some booze, he finds the lights, and we thought for a while it’s two different people. At some point, he realises there are cameras. He goes to the back to where the employee room is and finds a dark blue cardigan and a dirty server apron and covers his face with the apron and puts a cardigan on and comes back on the cameras.”