The idol shows Goddess Durga, depicted as a saree-clad doctor wearing a lab coat and stethoscope, killing a coronavirus-shaped Mahishasur.

Kolkata: Amid the COVID-19 pandemic, ‘coronavirus’ themed pandals have become the latest craze and now an artist has reimagined Maa Durga as a doctor killing ‘coronasur’, pictures of which have gone viral on social media. Also Read - Durga Puja 2020 Preparations: This Bokaro Village Gets Wi-Fi For the First Time, Thanks to Goddess Durga!

The idol shows Goddess Durga, depicted as a saree-clad doctor wearing a lab coat and stethoscope, killing a coronavirus-shaped Mahishasur. The goddess is seen holding a giant syringe that is being used to kill the demon.

Durga’s four children have also been imagined as other essential workers fighting COVID-19 from the frontlines.

Well, the COVID-19 themed Durga idol also caught the attention of Congress MP Shashi Tharoor who called it ‘brilliantly appropriate’ amid the pandemic.

Sharing the picture on Twitter, he wrote, ”Brilliantly appropriate #covid19-themed Durga Puja creativity from Kolkata, with the goddess slaying the virus! Salutations to the unknown designer & sculptor #DurgaPuja2020.”

According to a post shared by a Facebook user Nittya Paul from Matigara, the idol had been made in Siliguri in North Bengal by sculptor Jiten Paul. 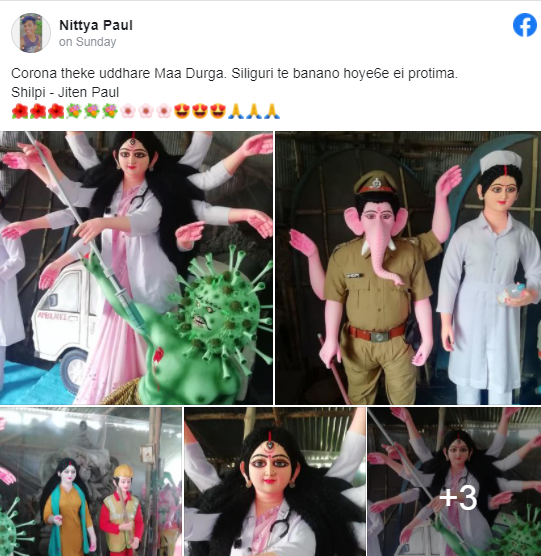 In a similar Covid-themed pandal in Kolkata, Goddess Durga has been depicted as a woman migrant worker with a shirtless toddler in her arms.

According to Telegraph India, the Barisha Club Durga Puja committee in Behala, Kolkata, has decided to install the statue to highlight the plight of migrant workers who were left without jobs and forced to walk hundreds of kilometres home.

The auspicious and widely celebrated Durga Puja festival will commence this year from October 22 and last till October 26.