Elon Musk formerly owned x.com when he was a co-founder at PayPal but lost the domain when the company went public.

Elon Musk just announced the launch of a new website X.com on Friday. The billionaire and founder of Tesla and Space X took to his Twitter to shares the piece of news. He had purchased the site earlier this week for what he termed as “sentimental reasons.” However, there is nothing much to look at. The website is just a single letter x. However, it could be the Tesla CEO’s next big project. He wrote on Twitter, “Excited to announce the launch of x.com!” His tweet left people confused over the mysterious website. X.com was an online banking and financial services platform that Elon Musk had co-founded in 1999. He formerly owned x.com when he was a co-founder at PayPal but lost the domain when the company went public. He was pushed out of the CEO role within a year but not before he had made a cool $165 million when eBay bought the company just three years later.Also Read - Now Uber Drivers Can Rent Tesla Vehicles at Just $ 334 a Week From Nov 1

Elon Musk purchased the domain back for an undisclosed sum earlier this month but according to speculation he paid an 8-figure sum for the property. The international group ICANN that regulates internet domain names decided in 1993 that single-letter domain names would no longer be available for sale. However, there were six domain names which were already taken up and were grandfathered in, including q.com,” “x.com, “z.com,” “i.net,” “q.net,” and “x.org.” However, in 2005 ICANN had a change of heart and toyed with the idea of freeing up the single-letter domains but that didn’t happen. There are now other single-digit domains like Twitter’s link shortener (t.co) and Facebook’s Messenger shortcut (m.me), but Q, X and Z are the only .com names that are still in use. Professor McGonagall And Gandalf The Grey Had A Magical Time At Wimbledon Watching Roger Federer Play Also Read - Tesla Goes Past $1 Trillion Market Value For First Time Ever, Joins Elite Club Of Microsoft, Google, Apple, Amazon, Facebook

Excited to announce the launch of https://t.co/J6TuRWIQAA! It’s a little verbose right now, but that will be fixed tomorrow. 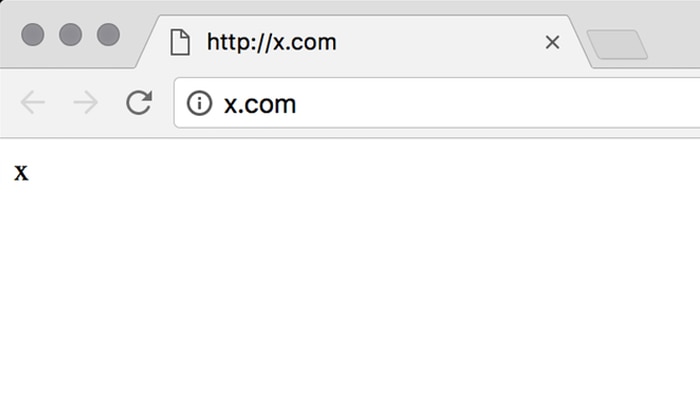 Elon Musk, shared on Twitter, “Excited to announce the launch of http://x.com ! It’s a little verbose right now, but that will be fixed tomorrow,” which means either he will tell us what his new move is and what is his plans with the new website. Understandably his twitter thread has given rise to a lot of speculations and suggestions. Steven Sinofsky who headed Microsoft’s Windows Division for three years, shared an image of the site’s source code. He asked Elon Musk, “http://x.com goes totally old school. Where’s the DTD @elonmusk ?” This Foreigner Solved The IIT JEE Question Paper In Half The Time And Got Abused By Indians On Quora

In this context, ‘DTD’ means document type definition which modern web pages use to define how the rest of the document will be structured and looks like. In reality it is the very skeleton of the website.
Elon Musk replied to this with, “I told you it was verbose. Better tomorrow :)”

I told you it was verbose. Better tomorrow 🙂

Benedict Evans who works with Steven Sinofsky at the venture capital firm Andreessen Horowitz asked Elon Musk, “Where’s the Transmeta-style hidden message?!” to which Elon Musk replied once again, “Stay tuned.” Danny Sullivan, a journalist and analyst who has covered the digital and search marketing space since 1996 and cofounder of and an advisor to Third Door Media which publishes Search Engine Land, Marketing Land, MarTech Today shared a screenshot for the Google search result of ‘X’ and he also shared some extra HTML to add in the website.

Look forward to seeing it rank tops on Google. Here’s your before screenshot. You got this @elonmusk — won’t be long 🙂 pic.twitter.com/bbbWYcbKCj

Elon Musk has still not divulged what is he going to use x.com as but a few people suggested that it can be used as an umbrella page for his other projects. Only time will tell whether he makes it a one-stop page access to his Tesla, SpaceX and Boring Company ventures.