From stripping down to bra and panties to going topless with a risqué view of her breasts and nipples to getting butt naked, Esha Gupta did it all.

Esha Gupta has been creating smokestorms with her brazen raw sex appeal in steaming hot pictures. The 31-year-old actress from Delhi has shed all her inhibitions in her latest photoshoot with fashion photographer, Arjun Mark. From stripping down to bra and panties to going topless with a risqué view of her breasts and nipples to getting butt naked, Esha Gupta did it all. The hot Bollywood star posted all the saucy images on Instagram with disabled comments section foreseeing the uncouth online trolls’ behaviour. But self-proclaimed moral police of the social media still attacked the actress by dissing her bold pictures by calling Esha Gupta ‘ a porn star’, ‘an aspiring Sunny Leone (adult star turned Bollywood heroine)’, characterless’ and every disgusting word from the slut-shaming dictionary. Esha Gupta Strips Off Naked for Raunchy Photoshoot: Baadshaho Actress Bare-Assed Pictures Will Leave Your Jaw on the Floor. Also Read - Spotted! Sunny Leone, Kartik Aaryan, Bobby Deol, Rakhi Sawant Papped in Mumbai- Video

Nude photoshoots are common across the globe but a rarity in India, courtesy it is equated with shamelessness and low moral values. Esha Gupta broke these self-imposed barriers with her god-damm-sexiest pictures shot by Ace photographer Arjun Mark, and creative collaborator and stylist, Mohit Rai. She first posted the teaser of the hot photoshoot on July 10 and since then has been dropping pictures and videos at a regular interval. Some of the photo uploads had comments section enabled while Esha disabled the option for most of the pictures. Malaika Arora Khan Slut-Shamed & Labelled As Gold Digger by Internet Troll! Actress Bashes ‘Shit Woman’ Comment in Style. Also Read - Sunny Leone Sets The Christmas Mood With Her Pictures in Cute Little Red Dress, Announces New Music Video

We got to see Esha Gupta in donning lacy black bra and panty showing off her sexiness in style. Her luscious lips and cleavage show were the highlights of this series of pictures. The Baadshaho girl moved on to share photos in which she wore one-piece lacy white lingerie giving a good view of her thighs and hips as she sexily munches on papaya. After this, she posted two images on August 9 where she went topless, wearing nothing but a lacy black thong. One of the pictures had Esha accentuate her boobs by pressing them against her knees which she captioned as, “All eyes on you”, while the other hot shot showed off her rounded butt with the same caption. Also Read - Mandana Karimi Alleges Producer Harassed Her, He Says She Took Rs 17 Lakh For Rs 7 Lakh And Still Behaved Unprofessionally

The diva by now had drawn massive flak online, but if the trolls thought, they could stop Esha – THEY WERE SO WRONG! Esha posted a picture and this time she exposed her fronts. She covered her modesty by shielding her nipples with two halves of pomegranate and gave a winning laughter. Continuing to slam the haters, two more photographs were uploaded that had Esha go butt naked on the bed. Baring her ass as she lied down seductively, Esha captioned the images as ‘Why stop now’ and ‘Life’s too short, laugh it out’. Take That! 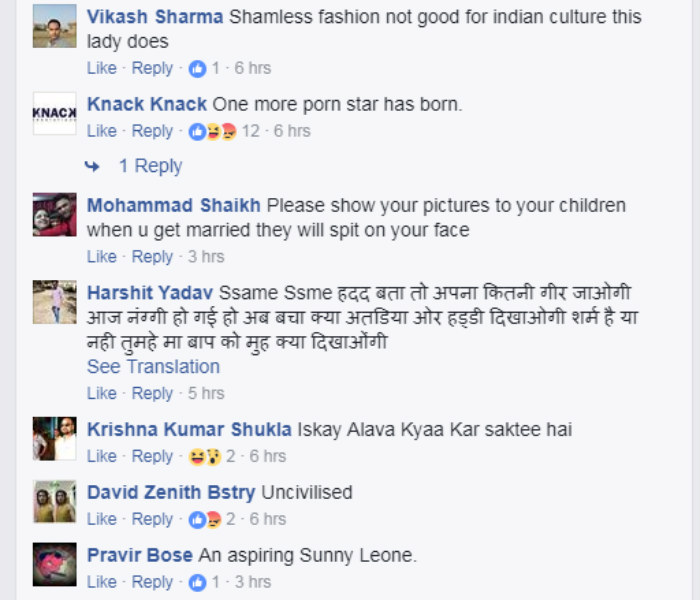 During the entire episode of sharing pictures from Arjun Mark’s nude photoshoot of Esha Gupta, the actress has been labelled as desperate for attention. The netizens are bashing up the former Kingfisher Calendar model by calling her a porn star, a wannabe who aspires to be the next Sunny Leone, the adult star turned Bollywood actress. Many are questioning Esha’s mental health with one user writing, “She is out of her mind bullshit destroying our beautiful culture” while another post reads, “Yeh ladki pagal ho chuka hai.” We wonder what would be the next picture in line from Esha Gupta as the perfect shutdown response.