Enough is enough. These two girls know how to respond such nasty incident. 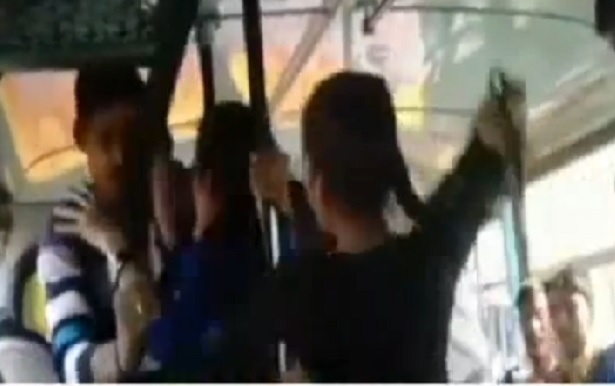 “Enough is enough!” Yes, that’s the lesson two girls from Rohtak (Haryana) delivered eve-teasers in a manner which the perpetrators will never forget in their life. Here is a video that shows the bravery of two sisters when they were harassed by three men in a running bus. The video shot by one of the passengers shows the girls thrashing the men who teased and harassed them. In this video the girls attempts to slap and hit the offender with a belt while all other passengers do what they do best – sit and watch the action like any spectator would. The culprit uses his strength and even makes an effort to push of one of the girls from the bus. Also Read - #JusticeForSudeeksha Trends on Twitter After UP Student Studying in US, Dies In Accident After Alleged Eve-Teasing

According to the reports, girls were returning from college when three men decided to show their superiority and harassed the girls. In what is not at all surprising, not a single passenger in the bus cared to help the girls, who decided to take matters into their own hands by staying strong. The courage shown by girls against the sexual violence is commendable. But what is worrying is the attitude of the common man who cared a damn and hesitated to come forward to the rescue of the girls. Also Read - Haryana Migrant Worker's Daughter Living on the Footpath, Scores 80.4% In Class 10 Board Exams

Watch the video showing heroism of two sisters below: