Using a reverse image search, we also found that the image in circulation is of the Beijing Daxing International Airport, China which is designed by Iraqi architect Zaha Hadid. The airport was opened in September 2019.

Noida: The foundation stone of the much-touted Noida International Airport in Uttar Pradesh’s Jewar, was laid by Prime Minister Narendra Modi on Thursday, November 25. The airport, which spans over a whopping 1,300 hectares of land has been heralded as Asia’s largest airport. Notably, the first phase of the airport is scheduled to be completed by 2024 and will have the capacity to serve around 1.2 crore passengers a year.

Meanwhile, several promotional videos of the airport have been doing rounds on social media. These videos give citizens a rough idea of how the airport would look like once its complete. Several citizens including leaders, and Cabinet ministers, have been sharing the video on their respective handles. The same video was also tweeted from government’s citizen engagement platform MyGov on its official handle, but was deleted later.

However, it turns out that the video has used an image of an airport in Beijing. The image appears at the 2 second mark. 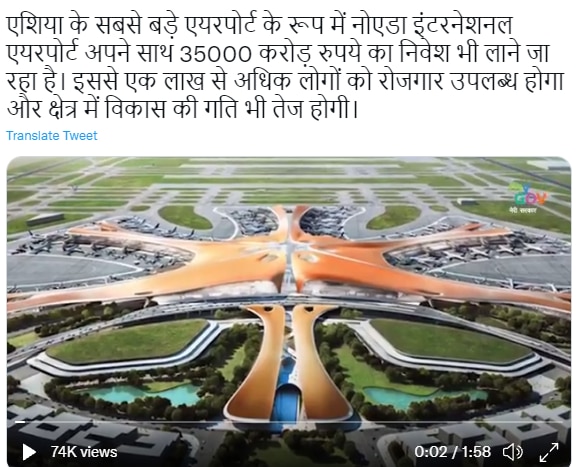 Co-founder of fact-checking website AltNews, Mohammed Zubair, shared the image of the faux pas and pointed out that the starfish design showed in a graphical representation of the Noida Airport, was that of the Daxing International Airport.

Using a reverse image search, we also found that the image in circulation is of the Beijing Daxing International Airport, China which is designed by Iraqi architect Zaha Hadid. The airport was opened in September 2019.

The image search led us to a article published by de zeen, a London-based architecture magazine. Dezeen shared the image on its website with the caption, “Zaha Hadid unveils designs for “world’s largest airport passenger terminal” in Beijing.” 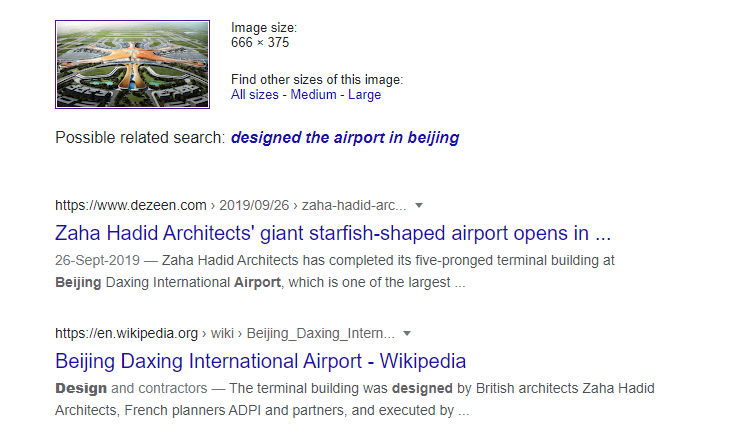 Many other websites including Daxing Airport’s website and Getty Images have also carried similar pictures as of China’s Beijing Daxing International Airport.

Claim: This is how the Noida international airport after it is completed

Fact: Photo of the airport in China is being shared as the Noida airport in Jewar.