Fake News: The Girl Receiving Covid-19 Vaccine in This Viral Video is Not Vladimir Putin’s Daughter!

As Russia registered the first COVID-19 vaccine of the world on Tuesday, President Vladimir Putin’s daughter became the first one to get inoculated. While talking of the vaccine, Putin emphasized that the vaccine underwent the necessary tests and has proven efficient, offering a lasting immunity from the coronavirus.

“One of my daughters got vaccinated. In fact, she took part in an experiment. After the first vaccination, she had a body temperature of 38 degrees [Celcius, 100 degrees Fahrenheit], the next day slightly higher than 37 [degrees], that’s all,” he said.

Meanwhile, as the news started trending online, people started to share a video which shows a girl getting a shot of the Covid-19 vaccine. Many users have claimed that the girl in this viral video is one of Putin’s daughters. Watch it here:

The video is fake

Well, as claimed by many, the girl in the said video is not Vladimir Putin’s daughter, but a volunteer for the vaccine. Turns out this video is an old one and was published last month in @RT_com article.

The original source of the video is the article published on July 20, 2020, the headline of which reads, ”Covid-19 vaccine created by the Russian military is closer to approval after last volunteers discharged from hospital (VIDEO).”

Here is a screenshot of the same: 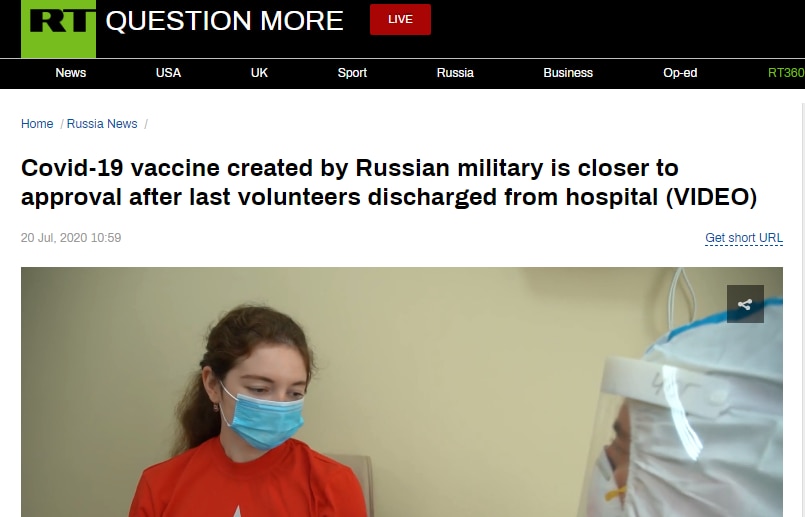 Many users also pointed out the same, with one user saying, ”She is not Putin’s daughter. Stupid people share anything without knowledge.”

Fake news not Putin's daughter. Also,this vaccine still hasn't got approval,the video is of the last volunteer to be discharged after giving vaccination.

This isn't Putin's daughter. They are both much older.

This isn't even a legit video. This is not the video of her daughter getting the vaccine.

Russian authorities have said that medical workers, teachers and other risk groups will be the first to be inoculated. Russia has the world’s fourth-highest Covid-19 caseload with almost 900,000 infections.