Ravichandra said he and his father with 10 other persons worked for two months to make the Prime Minister’s statue using two tonnes of iron nuts, thrown away by automobile companies.

Bengaluru: A father-son duo hailing from Andhra Pradesh’s Guntur district has built a 14-feet statue of Prime Minister Narendra Modi using iron scrap. The father-son duo are artisans Katuri Venkateswara Rao and Ravichandra who run ‘Surya Silpa Sala’ in Tenali town and are famous for making sculptures and statues with discarded material and iron scrap, mainly nuts and bolts.Also Read - Viral Video: Man Asks Barber to Give Him a Kim Jong-un Haircut and the Result Left him Laughing Hard | WATCH

According to India Today, the statue will be installed in a park in Karnataka’s Bengaluru by BJP corporator Mohan Raju on September 16. Ravichandra said he and his father with 10 other persons worked for two months to make the Prime Minister’s statue using two tonnes of iron nuts, thrown away by automobile companies. 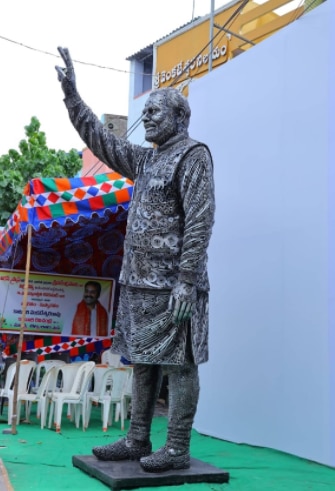 Katuri Venkateswara Rao said, “We have international recognition in making iron scrap sculptures. We have made artistic sculptures using almost 100 tonnes of iron scrap for the past 12 years. Recently we have designed a 10 feet height Dhyana Gandhi sculpture using 75,000 nuts for a world record. Seeing that, a Bangalore based organisation approached us to make the statue of Prime Minister Narendra Modi,” he added.

According to Rao, various kind of waste material was used and 10 to 15 workers worked day in and day out for almost two months to complete this statue. “For Mr. Modi’s statue, we used GI wire also for a better look. His spectacles, hairstyle and beard needed material like GI wires,” he told The Hindu. They have put the PM’s statue on display till it is taken to Bangalore by its owners.

“We have been making statues and sculptures with iron scrap for more than a decade. We have exhibited our iron scrap statues in countries like Singapore, Malaysia and Hong Kong. We have made the statue of Narendra Modiji with iron scrap. Many people who saw this work are appreciating us,” said Rao.