The Twitterati came up with hilarious responses too!

The beginning of the year also means the beginning of the awards season in the Hindi film industry, or ‘Bollywood’. Screen Awards, IFFA, Big Star Entertainment, Filmfare and Guild are the names of some of the popular award shows. Among these, the Filmfare awards was recently hosted in Mumbai. Naturally, social media was abuzz with talks of the award’s night. From who wore what to who won awards, a variety of issues were trending. Besides the official Filmfare magazine handle, Women’s magazine Femina too was tweeting about the winners. However, in the hurry, they ended up making a huge goof up How? By tagging Irfan Pathan instead of Irrfan Khan! What’s funnier is that Irfan Pathan noticed the mix-up and posted a cheeky reply by asking the organisers to send his award home.Also Read - Varun Chakravarthy Can be a Huge X-Factor For India in T20 World Cup, Reckons Irfan Pathan

This was the 63rd edition of the Filmfare awards and was, needless to say, a grand affair. The who’s who of tinsel town turned up in their fashionable best on January 20 at the NSCI Dome in Worli, Mumbai. The evening was hosted by Shah Rukh Khan and was accompanied by Karan Johar. While tweeting about who won the best actor in a leading role – male – award, Femina ended up tagging cricketer Irfan Pathan instead of actor Irrfan Khan. And the cricketer was among the first to respond with some tongue in cheek humour. “Thank u n sorry I couldn’t make it but u can send the award to me at my home ;);),” said Irfan in response to the Tweet. After this, a number of users posted hilarious comments on Femina’s tweet. While some attributed the error to autocorrect, some sarcastically said that they didn’t know Irfan Pathan had these skills as well. Also Read - Irfan Pathan Expresses Surprise, Questions Timing of Virat Kohli Announcement of Stepping Down as India's T20 Captain 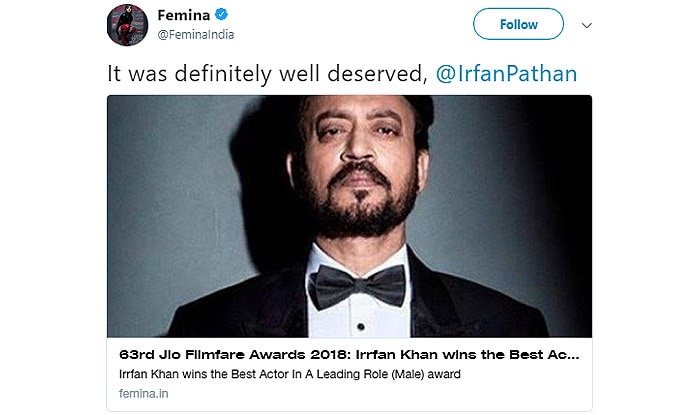 Here is how Irfan Pathan responded:

Thank u n sorry I couldn’t make it but u can send the award to me at my home ;);)

Earlier We didn’t know about this talent of @IrfanPathan Thank you @FeminaIndia to let us know. 😀 pic.twitter.com/bvJYaLYI0v

Some simply pointed out the error:

In which category Yusuf Pathan won the award ? And also Rohit Sharma , Do keep updated me …