Last year in October, Haryana Police appointed freestyle wrestler Geeta Phogat as Deputy Superintendent of Police (DSP). Phogat is a graduate and a sportsperson of international repute. She is also a gold medallist of the 2010 Commonwealth Games in Delhi. After 9 months of working with the Haryana Police, Geeta Phogat shared her first picture in her uniform. She captioned it as, “#haryanapolice#undertraining #dsp #policewoman👮‍♀️🤩”.Also Read - RIP Ritika Phogat: Sisters Geeta And Babita Mourn Death of 'Choti Behen'

Geeta Phogat, who is known for her stupendous wrestling feats in international competitions like Olympics, Commonwealth and Asian games, is presently under training. She has won many medals in international competitions, but the most important was the Gold Medal at the 2010 Commonwealth Games held in Delhi. Also Read - Babita Phogat's Maternal Sister Dies by Suicide After Losing Wrestling Match: Report

Geeta received praises and salutes from her friends and family. Even Bollywood celebrities took to Instagram to comment on her picture.

Karanvir Bohra: That is awesome Geeta👏👏👏👏

Hina Khan shared a story on her Instagram and wrote, “So so so proud of you Geeta, we talked about it in Spain. I wish you all the best darling. You are a star.” 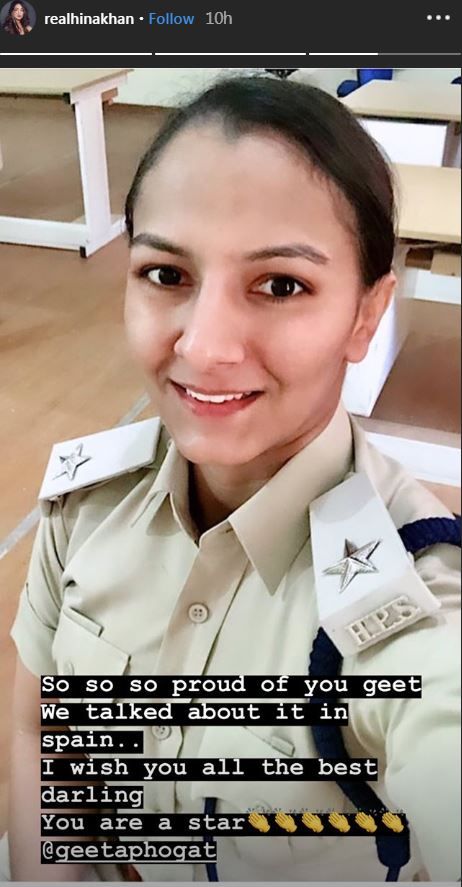 Proud of u..you are really an inspiration and setting out a great example of women empowerment for all the girls out there.. stay happy prosperous and healthy.. keep smiling..God bless..

For the ones who don’t know, Geeta Phogat got married to her longtime boyfriend, Pawan Kumar, who also happens to be a wrestler. Kumar, also won a bronze medal in the Commonwealth Games 2014 held in Glasgow.