Before Gen Bipin Rawat, Another Top Army Officer Died With His Wife in Mi-17 Chopper Crash in 1993

The previous incident of a senior Indian Army officer dying in a helicopter crash occurred in 1993 - and it also involved an Mi-17 helicopter, bad weather and the officer being accompanied by his wife.

New Delhi: India’s first Chief of Defence Staff (CDS) and former Army chief General Bipin Rawat died in a tragic chopper crash on Wednesday along with his wife Madhulika Rawat and 12 others after the Indian Air Force (IAF) Mi-17VH helicopter that they were travelling in crashed near Coonoor in Tamil Nadu. Thirteen out of the 14 people on board died and there was only a sole survivor – Group Captain Varun Singh SC, Directing Staff at DSSC – who also received injuries.Also Read - RIP Gen Bipin Rawat: Famous Quotes by CDS That Will Inspire Courage and Strength For Years To Come

This was the first fatality of a top defence official in nearly three decades – and has curious coincidences with the previous incident. Also Read - From Surgical Strike to Myanmar Mission: Here’s a Look at Illustrious Career of India's First CDS General Bipin Rawat

The previous incident of a senior Indian Army officer dying in a helicopter crash occurred in 1993 – and it also involved an Mi-17 helicopter, bad weather and the officer being accompanied by his wife. Also Read - From Subhas Chandra Bose to Sanjay Gandhi: Other Prominent Personalities Who Died in Air Crashes

Eastern Command chief, Lt Gen Jameel Mahmood, died in a helicopter crash in May 1993, while on a visit to Sikkim. 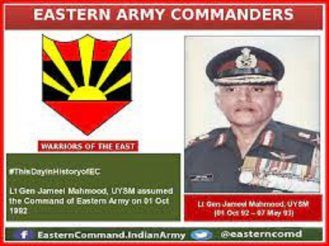 Commissioned into the Artillery in 1959, Mahmood commanded a platoon in Sikkim during the 1962 India-China war, and was conferred the Yudh Seva Medal. He also saw action during the 1965 and 1971 India-Pakistan war, held a series of key command (including of a brigade, infantry division, and the Srinagar-headquartered Chinar Corps), staff and instructional posts, including at the IMA, and the Army War College.

He became the Eastern Command chief in October 1992.

Three decades back, the Indian Army and Air Force lost a host of senior officials when an IAF Alouette chopper crashed near Poonch in November 1963.

However, the miraculous survival of all passengers of an IAF de Havilland Devon transport aircraft crash near Lucknow in February 1952 was a godsend to the Indian Army.

Lt Gen Shrinagesh’s ADC had to give up his seat at the last moment to accommodate Brig Singh. The person was K. Sundarji, who would go on to head the Indian Army in his turn.