The outrage on George Floyd‘s murder swelled into a protest on American streets but was met with tear gas as the police sprayed it to disperse the crowd after some allegedly turned unruly. Gathering at the same intersection where Floyd was pinned to the ground, the protestors chanted “No justice, no peace,” and Floyd’s last words, “I can’t breathe” as they marched to a police precinct to protest his death. US President Donald Trump called the demonstrators “THUGS” which resulted in Twitter flagging his tweet.Also Read - After Filing FIR, Delhi Police Seeks Action Against Twitter For Delaying Probe Into Child Porn Content

In a horrific incident of racial discrimination, three policemen were recorded on camera murdering George Floyd, as he pleaded for life. A Minneapolis officer knelt on the neck of the black man as he lay handcuffed and pleaded, “Your knee in my neck. I can’t breathe… Mama. Mama” while bystanders recorded the scene on their cameras. The cops even taunted, “get up and get in the car” as Floyd slowly grew silent and finally motionless. Also Read - PM Modi, Mamata Banerjee, Adar Poonawalla on Time Magazine's 100 ‘Most Influential People of 2021

Minneapolis Mayor Jacob Frey expressed outrage at the technique used by the cops to nail “the suspect” as it is against department regulations. He said, “The technique that was used is not permitted; is not a technique that our officers get trained in on and our chief has been very clear on that piece. There is no reason to apply that kind of pressure with a knee to someone’s neck.” Also Read - Al-Qaeda Likely To Recoup In Afghanistan, May Strike US In 1-2 Years Again: Intelligence Report

As the video of the killing of the 46-year-old restaurant worker broke the Internet, an unrest in Minneapolis followed for three nights straight where the protestors reportedly clashed with the police in riot gear repeatedly. During the demonstrations, a car and at least two other buildings in the vicinity were also set ablaze.

Reacting on the same, US President Donald Trump tweeted, “I can’t stand back & watch this happen to a great American City, Minneapolis. A total lack of leadership. Either the very weak Radical Left Mayor, Jacob Frey, get his act together and bring the City under control, or I will send in the National Guard & get the job done right….. (sic)” and later added, “….These THUGS are dishonoring the memory of George Floyd, and I won’t let that happen. Just spoke to Governor Tim Walz and told him that the Military is with him all the way. Any difficulty and we will assume control but, when the looting starts, the shooting starts. Thank you! (sic)”

I can’t stand back & watch this happen to a great American City, Minneapolis. A total lack of leadership. Either the very weak Radical Left Mayor, Jacob Frey, get his act together and bring the City under control, or I will send in the National Guard & get the job done right…..

Twitter, which had previously flagged two tweets of Trump with fact-checks and called them “potentially misleading information”, now flagged the tweet on Friday for violating its norms. In an all-out war against Trump, Twitter flagged the added part of his tweet stating, “This Tweet violated the Twitter Rules about glorifying violence. However, Twitter has determined that it may be in the public’s interest for the Tweet to remain accessible.” 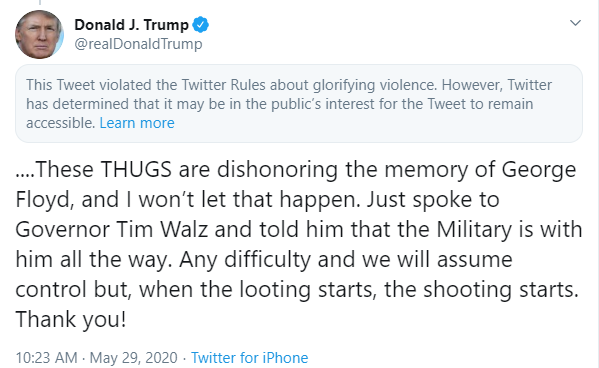 Though “people will be able to retweet with comment, but will not be able to like, reply or retweet”, Twitter explained, “We’ve taken action in the interest of preventing others from being inspired to commit violent acts, but have kept the Tweet on Twitter because it is important that the public still be able to see the Tweet given its relevance to ongoing matters of public importance.”

Earlier this week, the micro-blogging site for the first time fact-checked Trump’s tweets and tagged two of them with a fact-checking warning label. Enraged, Trump threatened Twitter with “big action”. Hitting back, Twitter CEO Jack Dorsey said that Twitter will “continue to point out incorrect or disputed information about elections globally”.
He said the action on Trump’s tweets does not make them an “arbiter of truth”, referring to Facebook CEO Mark Zuckerberg who jumped into the fray, criticising Twitter for flagging tweets by Trump. Trump, meanwhile, warned social media giants that his government could “strongly regulate” or “close them down”.

Regarding George Floyd’s murder, Minneapolis Police Chief Medaria Arradondo announced on Tuesday afternoon that the four police officers were fired following the death in custody of George Floyd. The suspension came in lieu of the calls that rose from the public, demanding for the officers to be prosecuted for murder.

The FBI is investigating the case and could turn it into a federal rights violation case by presenting its findings to the United States Attorney’s Office for the District of Minnesota. On the other hand, the Minnesota Bureau of Criminal Apprehension is conducting its own investigation into possible violations of Minnesota statutes.