Apart from Ryan Reynolds' sense of humour it is also his good looks that make women go weak in their knees.

Ryan Reynolds is a force to reckon with when it comes down to sarcasm. He speaks it as fluently as he does English and no we are not joking but we have proof from his tweets. Ryan Reynolds is like his character Deadpool, chatty and sarcastic and always has something funny and hilarious up his sleeve. He regularly puts up amazing dad jokes on Twitter which can cure away your Monday blues any day. Apart from his sense of humour it is also his good looks that make women go weak in their knees. So it comes as no surprise that this time a certain Gabi Dunn from Canada decided to photoshop Ryan Reynolds over her boyfriend’s pictures from the prom after they broke up and he went on to provide her with an apt and fitting reply.Also Read - Kangana Ranaut Reacts To Ryan Reynolds' 'Hollywood Mimicking Bollywood' Remark, Here's What She Has To Say

Ryan Reynolds who is married to actress Blake Lively is one of the most popular Bollywood actors and has fans in millions. After the divorce of Angelina Jolie and Brad Pitt, Ryan Reynolds and Blake Lively have become the most popular and adorable Hollywood couple. So it comes as no surprise that women want him in the role of their boyfriend or husband. Gabi Dunn, after breaking up with her boyfriend did not want his photograph appearing next to her in her prom photo. So she quickly edited the hapless bloke and replaced him with Ryan Reynolds instead. Milind Soman is on the Cover of the Magazine Just Urbane And Proves Yet Again That Age Is Just A Number! Also Read - Detective Pikachu Leaks Online, Ryan Reynolds Comes to The Rescue 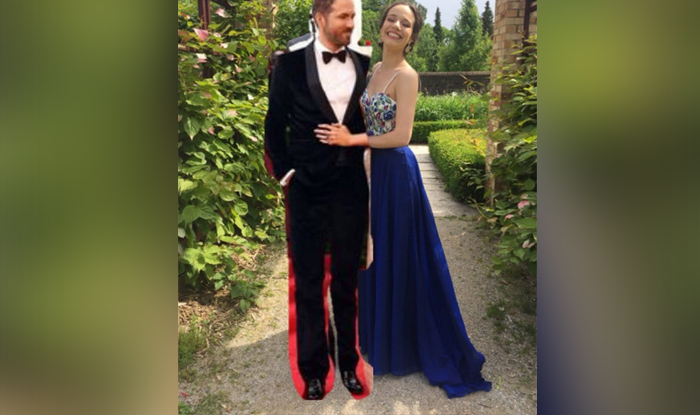 My boyfriend and I broke up a few days after prom, so I decided to “edit” the photos a little @VancityReynolds pic.twitter.com/Ecvn5Wkgb4

Ryan Reynolds who is very active on Twitter and is known for his comic streak was quick to respond to Gabi Dunn.

We should photoshop me over his yearbook picture next. #DontMessWithGabi https://t.co/o0qFBXvSNi

Now isn’t that cute of him? He even gave her, her own hashtag #DontMessWithGabi. No wonder women are mad after him. You go, Ryan!