A clever girl avenged her boyfriend for snubbing her during Kiss Cam by kissing the man adjacent to her during a basketball match in the US. 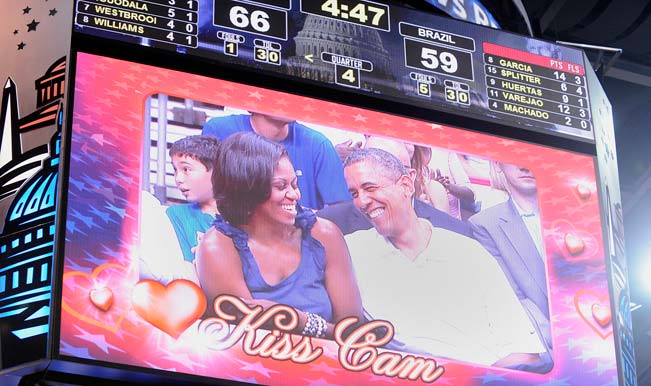 File Photo: America’s first citizens Barack and Michelle Obama too were once part of the social game.

Kiss Cam is a social practice that is well known across the United States and Canada. A cameraman focuses on couples attending sports events at an arena, stadium or courts and the pair express their affection in front of the public on the giant screen. Last Friday, in a Basketball match between Houston Rockets and New York Knicks at the Madison Square Garden, the camera continued to focus on one couple after the other. As any cheerful person would be, this girl got excited when the Kiss Cam put her on the big screen alongside her boyfriend. Also Read - Against Homophobia: Supermodel Aweng Ade-Chuol Kisses Her Wife on Cover of Elle Magazine

The public hoped that the couple would display their spirit, passion and their love for each other. But the guy decided to play spoilsport and refused to show the same excitement his girlfriend did…However, the girl ensured the viewers get to see a couple kissing passionately. Watch how she managed to absolutely leave her boyfriend in bewilderment in the video that has already amassed over 12 million views on YouTube. That should definitely teach a lesson or two to anyone who decides to not listen to their girlfriend; especially when they are being shown on live TV. Scroll down to see the video. Also Read - Kiss Cam Stole Show After Virat Kohli-Led India Scripted History at MCG | WATCH