Incidentally, the same hashtag trended way back in September 2019, when the PM had visited Chennai.

As of 2:45 pm, #GoBackModi became the top trend on Twitter with more than 12,000 tweets, with the number only increasing every second. Notably, the hashtag is a variation of #ModiGoBack, which is a part of a campaign by Bengaluru-based activists to prompt the PM to go back. Also Read - Will You Follow Me Back, Tweets Fan, 'Done So,' Replies PM Modi

“We want him to know that he is not welcome in South India because of his actions – his centralisation of power, his attempt to impose Hindi on South India and the Citizenship Amendment Act (CAA),” activist Manohar Elavarthy told the Deccan Herald. Also Read - PM Modi To Visit Karnataka Today, Will Release Third Installment of PM-Kisan Samman Nidhi 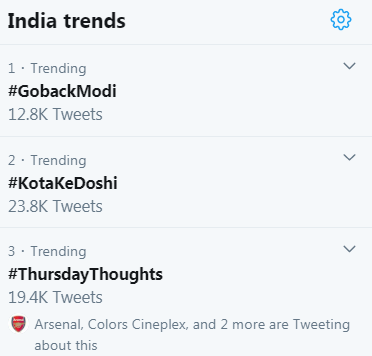 Incidentally, the same hashtag trended way back in September 2019, when the PM had visited Indian Institute of Technology in Chennai. He faced a similar social media backlash yet again when he visited the state in March, just ahead of the 2019 Lok Sabha elections.

In November 2019, when Modi arrived for campaigning in the Assembly polls in Jharkhand, #GoBackModi was again among the top Twitter trends.

When I saw #GobackModi trending in Twitter India, I thought he was visiting Tamil Nadu again. But this time, it is the people of BJP ruled Karnataka which is trending the popular hashtag! #GobackModi and take that Tejasvi Surya with you.

Meanwhile, here are some tweets from today’s Twitter storm where citizens are seen complaining about various govt policies:

@narendramodi #GobackModi because we are in need of a government that stands by the people and not against the people. pic.twitter.com/5oslpWc4zd

You appointed a Chowkidar for your house in 2014 !

In 2019 that Chowkidar is asking you to prove that you are the owner of the house !#GobackModi #IndiaDoesNotSupportCAA

Mr. Modi where were you when my state was reeling under the devastating flood & loss of life.

The person who has made science in this country a joke is meeting scientists today! #GobackModi

Farmers are the backbone of our nation.

Instead of empowering them, Modi has singlehandedly broken their backbone.#GoBackModipic.twitter.com/tfp9HtF4wb

As part of his two-day visit to Karnataka, PM Modi is scheduled to visit Tumakuru on Thursday to pay his obeisance to the departed seer of Siddaganga Math Shivakumara Swamiji and meet the present pontiff Siddalinga Mahaswamiji.

Later in the day, he is supposed to address a mega public meeting and in the evening he will reach Bengaluru to visit the DRDO facility to dedicate five DRDO Young Scientists Laboratories to the nation.