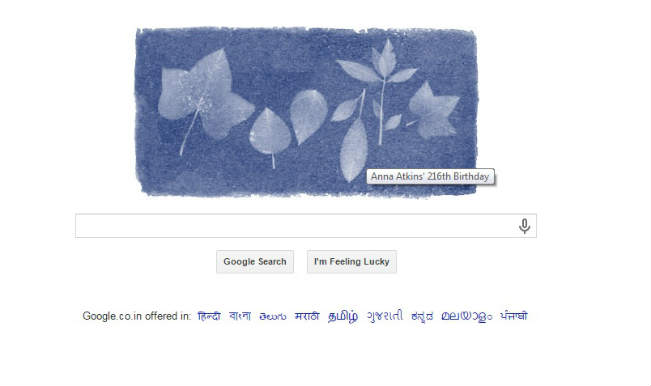 Internet search engine giant Google has created a special Google Doodle commemorating the 216th birth anniversary of Anna Atkins, botanist and reportedly the first female photographer. The new Google Doodle  features the leaves captured by the botanist in one of her first contributions to photography using the cyanotype technique. Anna Atkins was born in Tonbridge, Kent, United Kingdom on March 16, 1799, and is touted as the first female photographer, beginning her art in early 1800. (Some reports also say Constance Talbot, the wife of Atkins’ science teacher William Fox Talbot, was the first female photographer. There is no proof of this, as both women started photography around the same time.) Also Read - New Year’s Eve: Google Bids Adieu to 2021 With a Colourful Confetti Doodle

Atkins’ extraordinary contribution to the fields of botany and photography has been recognised by Google in today’s Google Doodle. She was born to a scientist father John George Children and was greatly inspired by him. Anna’s education was very different from that of any normal child. She was said to be very close to her father who introduced her to William Henry Fox Talbot from whom she got her scientific education. Under the teachings of her father and Talbot, she learnt about their inventions – the ‘photogenic drawing’ technique and the calotype. ( Also read- Holi 2015 Google Doodle: Colourful Smiley doodle splashed on your screen by Google!)

Further, Atkins, her father and her friend Sir John Herschel, invented the process of cyanotype photography. In October 1843, Atkins self-published her photograms in the book British Algae: Cyanotype Impressions. Her contributions to botany and photography are widely revered in Britain.

Atkins’ book of photographs were published in several instalments, but only 17 copies survived, which can be found in various libraries. Anna Atkins died on June 9, 1871, Halstead, United Kingdom at the age of 72. Her cause of death was reported as “paralysis, rheumatism, and exhaustion”. Anna was certainly a woman of substance of her time. (By Shrikrishna Iyer| Edited by Shweta Parande)