Apart from that options like ‘Free Home Delivery’ and ‘Cash on Delivery’ options are available.GOSF 2014 is going to a mega event which has the capacity of pulling millions of crowd on their site. 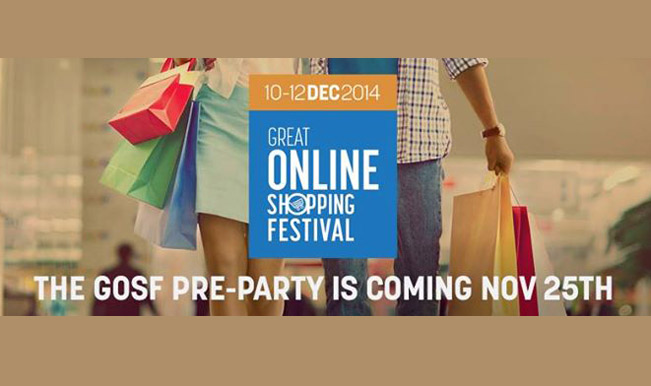 Here is a good news for all shopaholics; one of the greatest online shopping gala begins from December 10th, 2014. If you are eagerly waiting to buy new clothes, electronic appliances, household items this is the perfect opportunity. Google India has declared GOSF 2014. This is one of the biggest online shopping events coming up. GOSF is an event which brings a lot of happiness to several online retailers across India. The online fest gives special discounts to the customers. It has also launched exclusive game which test one’s shopping speed. Also Read - Google to Move Hangouts Users to Free Chat Service Next Year

GOSF invites lot of online shoppers, benefits to advertisers and market campaigns due to extensive e-shopping. 14 exclusive brands would be available for everyday shopping. In the GOSF shopping event, customers can purchase anything within 14 minutes worth Rs 2.5 lakhs. Also Read - Gandhi Jayanti 2020: Google Launches Online Exhibition Of Postcards Inspired By Mahatma Gandhi

In the year 2013, GOSF drew lot of attention from the buyers but faced some technical problems. Due to this, Google extended its shopping fest till another day. GOSF mainly focuses on grabbing as many buyers on site as possible. It not only helps in selling the products but also boosts the sales. Google earns more than 48% on this e-commerce portals.

GOSF 2014 initiative was launched by Google in the year 2012. The idea behind launching it was to boost the new era of online shopping in and around India. Rajan Anandan, VP & Managing Director, Google India, mentioned about the online shopping festival as the new modern version of cyber. This is the brand-new platform which creates the awareness and raises the consumer’s acceptance towards online shopping. Google or the GOSF website has announced pre-party to immense from November 25th, 2014 as the start of mega shopping festival.

Google declared the beginning of purchase power from December 10th till 12th, 2014. This is a two day shopping celebration which is just two weeks away. Micromax, Asian Paints, Koovs, HP, Lakme, Lenovo , Amazon’s Kindle, Snapdeal, FabFunish and FirstCry are the ones who have organized there products on sale. Apart from just products, Coupon Dunia have listed shopping coupons, while DesiDime is giving special section which helps the customers to purchase and shop from one place.

No one knows which products would be available for sale, they would be revealed on December 10th itself. There are various sections in GOSF 2014, customers would get a totally different section wherin everything will be price tagged at Rs 299. Apart from that options like ‘Free Home Delivery’ and ‘Cash on Delivery’ options are available.

GOSF 2014 is going to be a mega event that has the capacity of pulling millions of crowd on their site.