Hardik Pandya’s Ex-girlfriend Urvashi Rautela Congratulates Him on Engagement: ‘If You Need Anything, I am Here to Help’

Urvashi Rautela’s post for Hardik Pandya grabbed the maximum eyeballs as it looks like her heart is broken. Check here.

Indian cricketer Hardik Pandya recently surprised everyone and broke many hearts by getting engaged to Serbian actor-dancer Natasa Stankovic, who participated in Bigg Boss and recently was seen in Nach Baliye 9. Since Wednesday, a lot of wishes from Bollywood, Sports and fans have been bestowed upon the couple on social media, but it’s actor Urvashi Rautela, who was rumoured girl-friend of Hardik who shared the love birds’ picture and wrote a heartfelt note for them.Also Read - Highlights IRE vs IND 2nd T20 Cricket Scorecard: Umran Avoids Last Over Scare As India Won By 4 Runs

Urvashi’s post grabbed the maximum eyeballs as it looks like her heart is broken. However, Urvashi wished in the sweetest way possible- “Best wishes on your engagement @hardikpandya93 May your relationship always be filled with lots of love and happiness. On your engagement, I wish you both a wonderful life and an everlasting love. If you need anything, I am here to help.” Also Read - Hardik Pandya in Our Plans For Captaincy Role to Manage Rohit Sharma's Workload - BCCI Selector CONFIRMS

Rumours about the Urvashi-Hardik had been making quite some rounds in the past and recently there were speculations that the heartthrob cricketer gifted Urvashi a puppy to congratulate on the actor’s recent film. The post garnered attention as fans got emotional about it. Also Read - Hardik Pandya REVEALS Why Ruturaj Gaikwad Did Not Open During 1st T20I vs Ireland Due to Niggle in Calf

Even Yeh Hai Mohhabatein actor Aly Goni, who is the ex of Natasha Stankovic, commented on their picture with hearts. The ex-flames were also seen in dance reality show Nach Baliye 9.

Have a look at how the actor reacted: 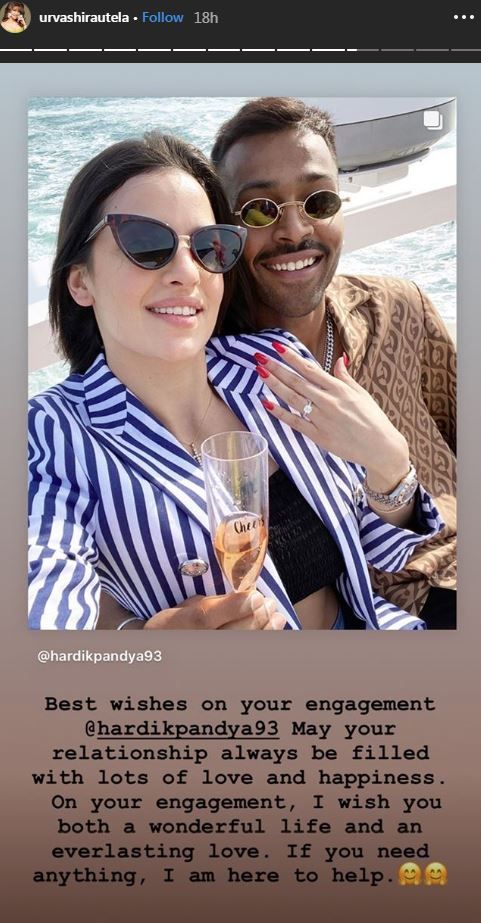 Hardik Pandya got engaged to long-time girlfriend Natasa Stankovic on 1st January 2020 in a yacht. Pandya shared a series of photos and a video of the engagement ceremony that was attended by the duo’s close friends. “Starting the year with my firework,” read Pandya’s caption on his latest post-Instagram in which he and Stankovic are seen holding hands.

For a long time, Natasa belonged to Hardik’s close friend circle and the cricketer also introduced her to his parents as well. On New Year’s eve, Stankovic posted a picture on her Insta, to which Pandya had commented with a “Woohooo”. Stankovic replied to it saying: “nice click Mr. Pandya”

Pandya has been missing cricket since September due to a troubled back which required surgery. After intense rehab, Pandya is said to be making steady progress and was named in India’s A squad that will be touring New Zealand in January 2020. Pandya had also posted a video recently where he was seen back in the nets.