If exit polls are to be believed, it will be a well-fought victory for BJP. But Haryana being Haryana, it isn’t a cakewalk for any party. 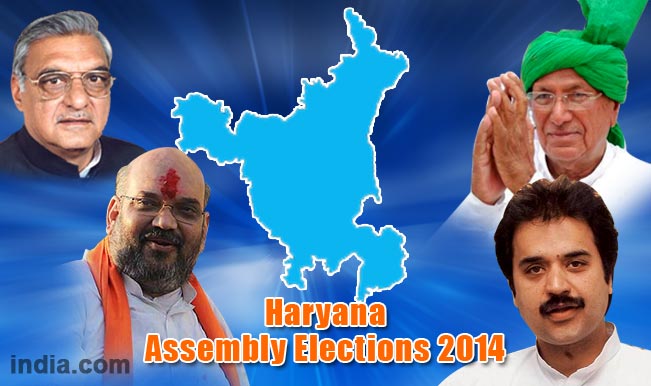 The much awaited Haryana Assembly Results 2014 are to be out in less than 24 hours on Sunday. October 19 will either be doomsday for the Indian National Congress (INC) or Bharatiya Janata Party (BJP) will go on to establish a Modi legacy. The Indian National Lok Dal may spring a surprise. However, the exit polls have signalled that it will be landslide victory for the BJP but it is yet not clear if will the party be able to form the government in Haryana of its own. Amit Shah (BJP), Bhupinder Singh Hooda (INC), and Om Prakash Chautala (INLD) have all campaigned aggressively criticising their counterparts in equal measures. Also Read - India's First Air Taxi Service Begins From Haryana, Centre Plans to Bring More Such Facilities Soon

It will be the test of people’s trust on Narendra Modi’s model of governance so far, Hooda’s promises and Chautala’s CM’s dreams. Which party will win the electorate vote and who will emerge as the victor in this three-way contest? The campaigning in the 2014 Haryana Assembly Elections were quite interesting in the last few days. Leaders across party lines pitched their thoughts and views for Haryana in coming years. Also Read - Haryana Shocker: Man Arrested For Raping Daughter For 7 Years, Forcing Her to Abort Pregnancy

If exit polls are to be believed, it will be a well-fought victory for BJP. But Haryana being Haryana, it isn’t a cakewalk for any party. There are many constituencies which saw regional politico heavyweights campaigning heavily against each other. We look at some of them below:

The battle of Ambala will witness the poll battle between sitting MLA Anil Vij (BJP), senior leader Nirmal Singh (Congress), and Suraj Parkash Jindal (INLD). Vij and Singh share an eventful history as the former has won against Singh in the 2009 Haryana Assembly polls. Vij enjoys a considerable amount of support among the party cadres and local public, whereas Singh has also remained MLA from neighbouring constituency- Naggal. Jindal is district president of Congress and will be fighting the elections for the first time.

The Barwala seat will be a four-way contest between Surinder Punia (BJP), Ramniwas Ghorela (Congress), Ved Narang (INLD), and Ramniwas Rara (HJC-BL). Haryana witness caste-factor driven politics in the state will witness Jats taking on non-Jats in Barwala constituency. BJP has fielded a Jat candidate, whereas both Congress and INLD candidates are non-Jats. The Jat-dominated Barwala provides a sleek chance for BJP to pounce on INLD’s seat. Ifthe alleged charges of illegal land use work against Congress candidate will be ignored or looked upon by the voters, is for results to tell.

A three-way contest awaits in Mahendergarh where the current MLA is of Congress party. Ram Vilas Sharma (BJP), Rao Dan Singh (Congress), Nirmala Tanwar (INLD). Rao has  strong support in Mahendergarh, as he has been chosen three times in 2000, 2005 and 2009. Although he has a stronghold in region, he faces a tough contest against Ram Vilas Sharma, as there are speculations of Ram Vilas being BJP’s chief ministerial candidate. INLD’s Nirmala Tanwar was a last minute replacement of Rao Bahadur Singh; may go against them as there was resentment among local party workers.

However the Haryana’s most urban city, Gurgaon witnessed the lowest voter turnout in the district – 63.8 per cent, the poll-battle is quite buzzing. Gurgoan constituency will see Umesh Aggarwal (BJP), Dharambir Gaba (Congress), Gopi Chand Gehlot (INLD), Kanhaya Lal Pahwa (HJC-BL) battling it out. The BJP won the Paliamentary seat in Lok Sabha Elections here, but it was a vote for Modi Sarkaar. It will be a close between BJP and INLD, more likely for BJP to win. Both Congress and HJC-BL have little to offer to make a strong statement here.

The high profile constituency of Hisar will witness politico heavyweights Dr. Kamal Gupta (BJP), Savitri Jindal (Congress), Bhim Mahajan (INLD), Gautam Sardana (HJC-BL) contesting. Hisar has been a Congress fortress and it will be tough for its opponents to breach in. Dismissing the ‘Modi wave’ factor, the locals reportedly said that Sardana may get some votes because of the caste-factor. Otherwise Jindal seems to be leading the race clearly.

One of the hot seats in Haryana Assembly Elections, Karnal has always been the talk of the town when it has come to politics. It has an amazing set of candidates contesting the Karnal constituency. The BJP has fielded it National Executive member Manohar Lal Khattar; INLD has fielded deputy mayor Manoj Wadhwa; Congress has placed its former district president Surinder Narwal. The most-talked politician in the region is Jai Prakash Gupta, who will be contesting as an Independent candidate. Who will Karnal vote – an outsider, deputy mayor or an Independent candidate?

Sirsa sounds familiar, eh? Constituency of former Haryana Home Minister Gopal Kanda, Sirsa witnessed a bloodied incident during the polling this time. It involved Gopal Kanda;. Sirsa will have Sunita Setia (BJP), Naveen Kumar Singla (INC), Makhan Lal Singla (INLD), and Shyam Sunder (HJC-BL) contesting to win the much coveted seat of Haryana. Issue of lack of infrastructure and civic amenities have always been the talking point in Sirsa’s poll campaigns and it wasn’t any different this time either.

In the curious case of Haryana politics, the caste factor has historically been the decisive factor. However, the 2014 Lok Sabha Elections told a different story when majority of the Haryana electorate rose above the traditional caste-driven politics and voted for Narendra Modi. The results for the Haryana Assembly Elections will be out on Sunday and  the counting of votes will begin from 8 am in the morning. The fate of 1,351 candidates hang in balance as the 1.63 crore strong electorate have already voted in the 90-seat Haryana Legislative Assembly.