Haryanvi hot and sizzling dancer Sapna Choudhary is famous for rocking the stage with her sexy latkhes and jhatkes. Sapna, who rose to fame with her blockbuster song Teri Aakhya Ka Yo Kajal and Bigg Boss, is doing great in her career and now will be seen in one more film ‘Tumse Nahi Ho Payega’. Yes, you read that right! Sapna keeps her fan family updated with her work. Her fan page recently took to Instagram to share the poster and new look of Sapna Choudhary in the film. Also Read - Sapna Choudhary And Her Family Booked For Cheating And Breach of Trust

The Anarkali of Haryana is now all set to entertain her huge fan following with the upcoming film ‘Tumse Nahi Ho Payega’. In the poster, Sapna can be seen posing in a black outfit and looks beautiful with the co-star Sydharth Gaaba. The comedy-drama will also star AI John and Preeti Rana. The film is directed by Sunita and Vishal, produced by Sumeet Singh. Also Read - A Man Beaten to Death Over Sapna Choudhary Song in Bulandshahr, UP

Take a look at the poster posted by a fan page: 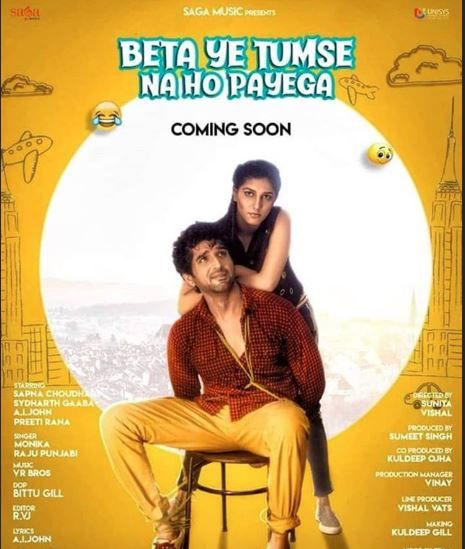 There is no date of release mentioned on the poster and it says coming soon. Sapna has earlier worked in films like Dosti Ke Side Effects, Journey of Bhangover and Nanu Ki Jaanu. Also Read - Sapna Choudhary’s Husband Veer Sahu in Trouble, Police Case Filed For Violating COVID-19 Guidelines

Sapna has been in the news for a long time. According to the rumours, she was expected to contest the upcoming Lok Sabha polls for Congress. As per the reports, the actor has denied joining the Congress party. She said that she will not campaign for any particular party in the Lok Sabha polls.