Haryanvi dancer and singer Sapna Choudhary was recently in Nepal for her stage show. She entertained the audience with her desi thumkas on her popular tracks. Now, she took to Instagram to share her pictures from the runway at the airport. In the pictures, she is seen donning an all black tracksuit with the hoodie on her head. No make-up avatar makes her beautiful and raw. As per her description, she is flying back to Delhi and we wonder if it is for her another stage show.Also Read - Boy Impresses Sapna Choudhary By Mimicking Her Dance Steps From Teri Aakhya Ka Yo Kajal. Watch Viral Video

The Haryanvi sensation is gearing up for her Bollywood debut. She will be seen playing the role of a cop in Dosti Ke Side Effects. The trailer received a positive response from her fans and the movie is all set to hit the screens on February 8. It also features Vikrant Anand, Zuber K Khan, Anju Jadhav, Neel Motwani and Sai Bhallal in important roles. It will be interesting to see how the film performs at the ticket window. Also Read - Sapna Choudhary Shares Clip of Massive Gathering of Fans at Her Dance Show, Video Goes Viral

Sapna also took to Instagram stories to share her picture in a high ponytail, high-neck sweater and sunglasses and we do not need to say that she looked beautiful, as ever. 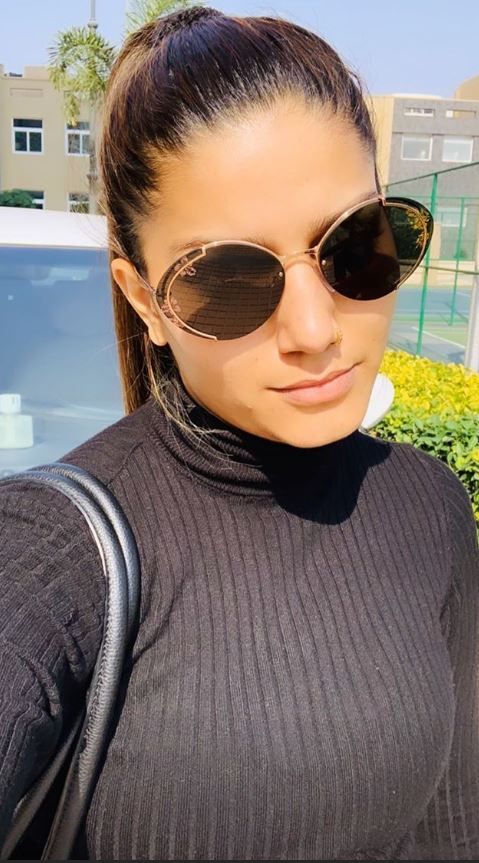 Earlier her video grooving to Goli Chal Javegi has gone viral on social media. Dressed in pink and yellow salwar suit, the lady looked amazing. People enjoyed the performance and also cheered for her.

Currently, Sapna is busy with the promotions of the movie. She graced Sunil Grover’s show Kanpur Wale Khuranas and grooved to Teri Aakhya ka yo Kajal along with the entire cast.

Her song from the movie titled ‘Tring Tring’ became a huge hit on YouTube. Talking about it, she said, “Initially the film did not have an item number but after the public demand the song was included in the film.”