It is Gharamsankat in India 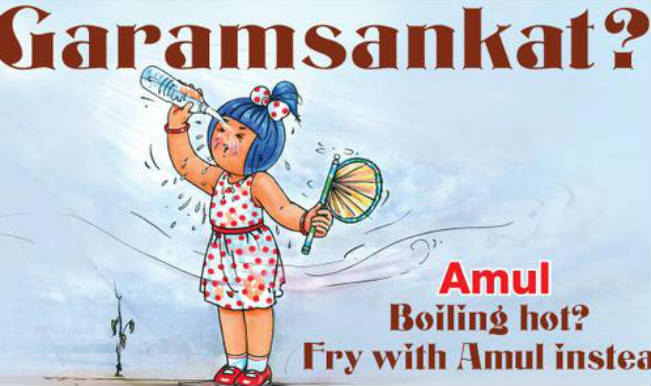 The heat wave continues to sweep India this summer, with temperatures soaring above 48 degrees in some parts of the country. The number of deaths caused by the scorching sun has gone up to 1,000 and looks like there will be no respite from the heat, at least this week. The Meteorological Department has predicted that the monsoon is expected to arrive in India on or around May 31; thus the mercury will continue to soar this week. Also Read - School Reopening News: Classes to Resume in Telangana From Feb 1, State Issues Guidelines

Amul ads are always known for their quirky reactions to whatever is in the news, and sometimes serious reactions, too. Here they are once again, talking about the heat wave in India. Amul has very well depicted the trouble people are in these days. The catchy tagline in their latest banner reads, ‘Gharamsankat’ – inspired by the Hindi word dharamsankat that means being caught in a tough situation. The Amul reads further, ‘Boiling hot? Fry with Amul instead!’ It shows the Amul girl in the hot sun, splashing a bottle of water on her face. Also Read - Top News Headlines From Andhra Pradesh & Telangana: Chaos at KT Rama Rao's Rally; Free Water to 9 Lakh People; more

Last week the national capital recorded the season’s highest temperature at 44.5 degrees Celsius and crossed the 46 degrees Celsius mark at the Palam observatory. Andhra Pradesh is the worst-hit state with sweltering temperatures killing over 900 people while in the neighbouring state of Telangana, where temperatures rocketed to 48 degrees Celsius, over 200 people have died so far. With temperatures rising, the Health Ministry is all set to roll out an advisory for all the states on preventive measures to tackle the condition.