Television’s hottest actor Hina Khan, who has been ruling the industry for a while now, shares her secret for being so sexy and pretty. The sensational actor keeps her Instagram up-to-date with the latest gym pictures and videos. Hina Khan inspires several fans to pump up the iron and maintain a healthy lifestyle. Recently, the 31-year-old shared a series of pictures from her gym routine and they will surely motivate you to hit the gym. While sharing the pictures with fans, Hina wrote, “That last painful rep. And the satisfaction on my face post that..Be the girl who decided to go for it💪 #GymSwagger #Goals#Cannes2019 #GettingTheir#NewChapter #ThankyouGod #Peace#FitGirl #GymFashion @victoriasport” Also Read - Hina Khan Twirls And Pose In A Chic Monochrome Graphic Dress By Swapnil Shinde

Hina Khan, who transitioned from playing a simple daughter-in-law in Yeh Rishta Kya Kehlata Hai to a vamp on Ekta Kapoor’s Kasautii Zindagii Kay 2, is famous among her fans for sartorial choices. Her gym wears are so cool and fashionable that she gives everyone gym goals. Also Read - Hina Khan Celebrates Diwali In A Gorgeous Green Embroidered Saree By Pallavi Jaipur Worth 37K

That last painful rep. And the satisfaction on my face post that..Be the girl who decided to go for it💪 #GymSwagger #Goals #Cannes2019 #GettingTheir #NewChapter #ThankyouGod #Peace #FitGirl #GymFashion @victoriasport 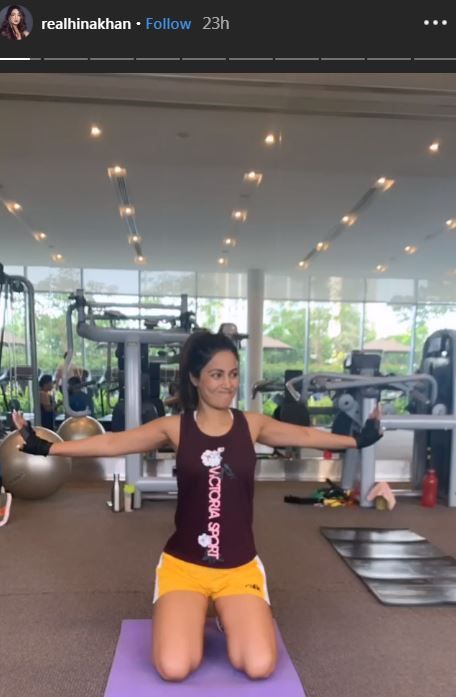 Hina Khan is all set to make her Bollywood debut with Lines and is also doing back-to-back photo shoots. In her latest picture, she can be seen in a gym avatar. According to a report in Times Now, the film’s first official look will be unveiled at the Cannes Film Festival and the entire team of Lines will be heading to the French Riviera to attend the launch.

Lines is directed by Hussain Khan and produced by Rahat Kazmi, Tariq Khan, and Zeba Sajid along with Jayant Jaiswal. the film is a tragic love story which is set in Kashmir, during the times of Kargil war, the film revolves around the story of the lives of people staying close to the LOC.