Claiming that Halal was 'gaining a stronghold over the world economy', Hindutva outfits trended #BoycottHalalProducts on Twitter inciting communal tensions once again on social media despite PM Modi's call for unity and brotherhood

After the advertisement by a cancer hospital in Meerut denying admission to Muslims, BJP MLAs in UP openly harrassing Muslim vendors, Jain Bakery flaunting ‘No Muslim Staffs’ and Islamophobic tweets by BJP MP Tejasvi Surya adding fuel to the fire, the communal tension on Twitter rose again when a pro-Hindutva periodical and a BJP MLA called for an anti-Halal campaign. Making the hashtag #BoycottHalalProducts trend on Twitter, Sanatan Prabhat and BJP MLA Raja Singh openly incited communal hatred despite PM Modi’s call for unity and brotherhood.

Taking to their Twitter handle recently, the pro-Hindutva group of periodicals along with its spokesperson Chetan Rajhans, BJP MLA from Gosha Mahal T Raja Singh in Telangana, Hindu Jagruti’s National Spokesperson Ramesh Shinde and Sudarshan News TV channel all united to spew hatred against the minority community by alledging how halal was “gaining a stronghold over the world economy”. Following the communal hatred lead by Sanatan Prabhat, these people called for curbing of “economic jihad” and were soon joined by other Islamophobes on Twitter. 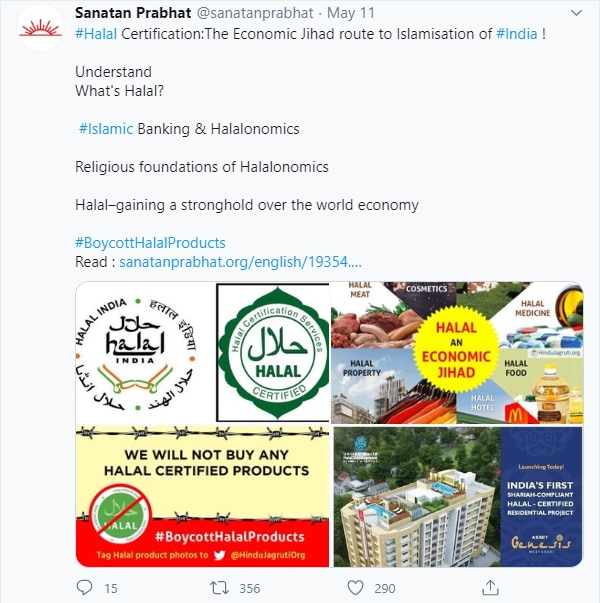 Soon enough, Chetan Rajhans released a video on Twitter alledging, “Food production companies including IRCTC, Zomato, McDonalds, Haldiram, Patanjali are seeking Halal certification which means that they are liable to hire Muslim employees and not Hindus as workers. This is the bone of contention. If Hindu society will not be employeed…nobody nowadays cater to Hindus’ preferences. Every restaurant claims to be ‘Halal Certified’ meaning the butcher here is a Muslim. This is discrimination of the society. The Hindu word in the Hindu fruit shop was constitutional, yet the shopkeeper was prosecuted! Yesterday Jain hotelman was prosecuted in Chennai; But there is no action against companies denying employment to the Hindu society by the Halal certificate. The reason for current economic crisis is the fact that we have favoured halal. I request you all to boycott halal economy, boycott halal products should be our slogan.” 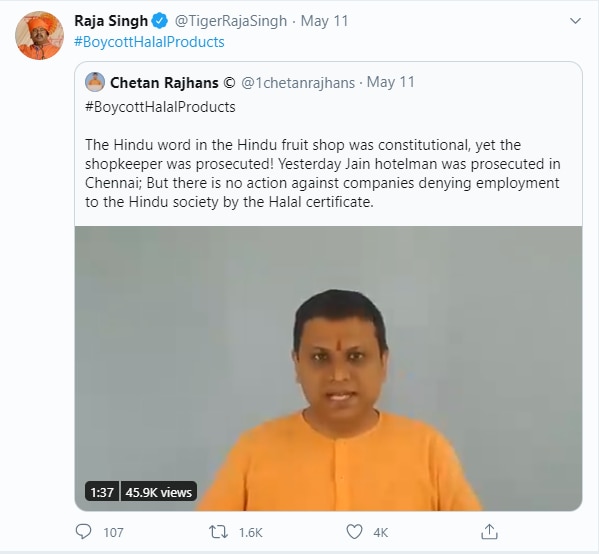 The Hindu word in the Hindu fruit shop was constitutional, yet the shopkeeper was prosecuted! Yesterday Jain hotelman was prosecuted in Chennai; But there is no action against companies denying employment to the Hindu society by the Halal certificate. pic.twitter.com/CAURMWhLmZ

On the other hand, Sudarshan News TV channel too ran a full fledged programme calling for the boycott of Halal products. The channel’s Editor-in-Chief Suresh Chavhanke tweeted a series of #HalalConspiracyOnSudarshan and called for a continuation of the anti-halal campaign. 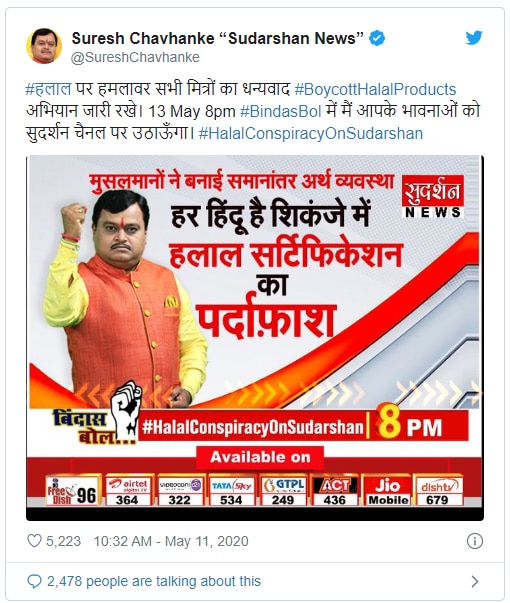 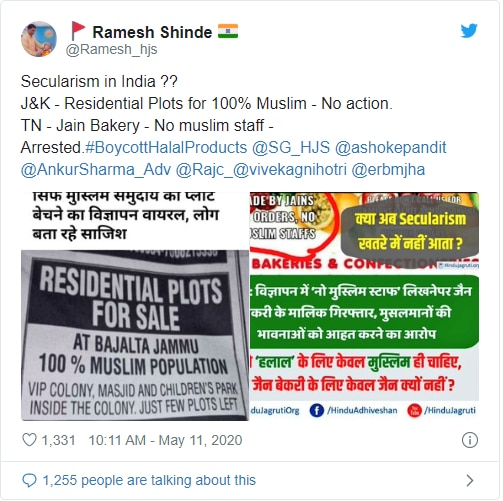 It is interesting to note that in reality, while the usage of Halal certification is most commonly around food items, it is a much broader concept which means “permissible”. Those observing halal must pray over the meat and slaughter the animal while reciting the Kalma but in a broader sense, halal is anything that is “lawful”. It is opposed to Haraam which is anything “forbidden” like income made through illicit means, interest, pharmaceutical goods having alcohol or pig gelatin. In food the neat of pigs, blood, carrion (meat of an animal that is dead already), alcohol and most narcotic substances are totally forbidden and are not halal.

Not just in Islam but in other communities as well, people adhere to dietary restrictions like onions and garlic are prohibited for Jains, the kosher dietary practices in the lives of Jews or the Sikhs’ Rehat Maryada which restricts consumption of Bajar Kurehit that is meat which is slaughtered ritually or through sacrifice.

Giving a topsy-turvy twist to facts and spreading of fake news and false practices seems to be the new normal. These, leading to communal animosity, are on a remarkable high in the country at a time when the world is focusing on more pressing issues like combating the COVID-19 pandemic.

Recently, the saffron party had drawn much flak globally for inciting Islamophobia courtesy the unjustified communal actions of its MLAs in UP or Bharatiya Janata Party MP from Bengaluru, Tejasvi Surya’s previous hate tweets. Offending members of the Saudi royal family as well as the prominent Arab women leaders, the abuses had jeopardised the ties between India and Gulf recently until PM Modi had to intervene with clarifications and calls for unity and brotherhood.