Many DU students revealed similar incidents and said how troublemakers throw ink all in the name of Holi and how men harass them.

Holi, the festival of colors is around the corner and many people start playing with water-filled balloons and colors few days ahead of the festival and this year too the trend seems to be the same. The festival becomes boon for troublemakers as many smear colors and flung water balloons on random people under the pretext of the festival. And in Delhi University as well some took undue advantage of this one sentence- Bura na mano Holi hai and turned the holi festival as a hooligan festival. Yes, vile behaviors and hooliganism were reported at the Delhi University.  “I didn’t know what semen flinging was, I learnt that today. My kurti tells the tale,” a student of Lady Shri ram College for Women, Delhi University, wrote in her latest Instagram post. In the post, she described the whole incident and how she had gone out to Amar Colony for lunch with a friend and while heading back to her hostel she was attacked with liquid filled balloons. Also Read - Delhi Traffic Alert: Ghazipur, Singhu, Harewali Among Others Shut For Traffic Movement | Check Advisory Here

Soon she realised that the balloons contained semen.  The student who is from Nagaland shared the story in two-part Instagram post. The post soon went viral and many people came out in support of her. Soon after her post, another LSR student revealed a similar incident.  She shared her experience as well on Instagram. “My white kurta doesn’t invite you to throw balloons at me. A girl walking alone on road doesn’t invite you to wish her happy holi by touching her body,” she wrote. Also Read - Delhi Adarsh Nagar Chain Snatching-Murder: Police Mulling Separate Snatching Law With Enhanced Punishment 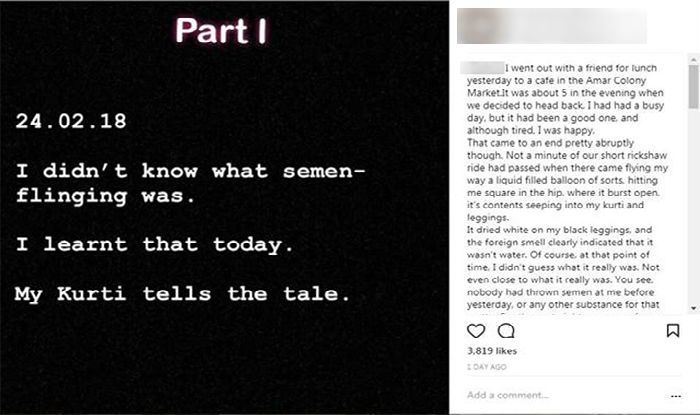 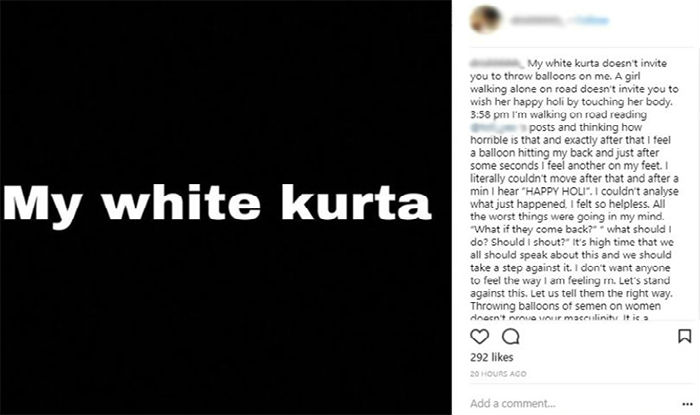 Many DU students revealed similar incidents and said how troublemakers throw ink all in the name of Holi and how men harass them.  Hooliganism is quite common during Holi and that’s why many women refrain from celebrating this festival. Holi is a very auspicious occasion and people celebrate the same with great enthusiasm by forgetting and forgiving and make merry by eating sweetmeats and by playing with colors but these incidents dampen the whole spirit of the festival. What are your views on the same? Let us know in the comments below.