Soha Ali Khan will be seen in an all new sexy avatar as she features on the cover of Maxim for the month of June. 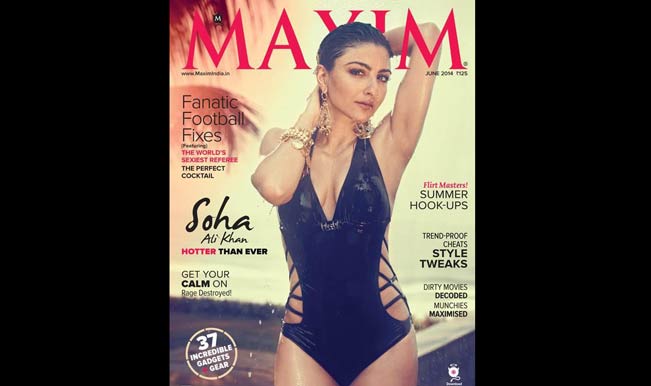 Soha Ali Khan is donning a brand new sexy avatar! She is seen in a hot black swimsuit and golden accessories on the cover photo of Maxim magazine June 2014 edition. The cover reads ‘Soha Ali Khan Hotter Than Ever‘ and this is apparently the most sensuous photograph of Soha until now. And the mag has sexier pictures inside! Also Read - Approximately 84% Indian Fathers Believe Raising Child is a Mother's Role

Soha debuted in Bollywood with Dil Maange More and later starred in good movies like Rang De Basanti, Mumbai Meri Jaan and Tum Mile. She was last seen in Mr Joe B. Carvalho. She was initially very inhibited and has never really shed her clothes for any onscreen sleaze. But with this act, she has set her standards high this time. The well cut swimsuit along with designer jewellery gives her a unique and hot look! Also Read - From Priyanka Chopra Jonas to Amitabh Bachchan And Kareena Kapoor, How Bollywood Celebs Rang in New Year 2021

Check out the video below!