The astute politician, who hails from Madhubani constituency in Bihar took on the opposition in a veiled attack which left them spell-bound. 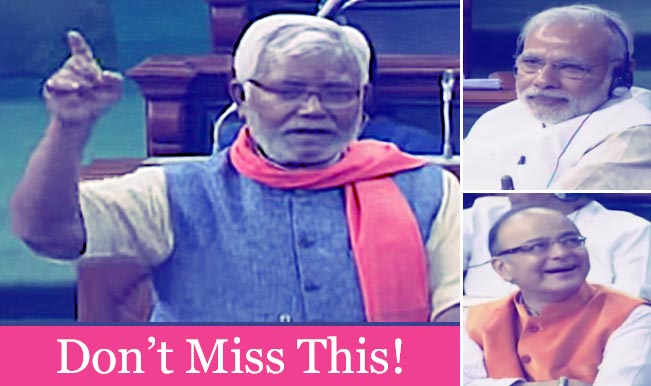 Hukmdev Narayan Yadav, Bharatiya Janata Party’s MP from Bihar, gave an apt reply in the Lok Sabha earlier this week while delivering a slyly crafted salvo against the Opposition. The astute politician, who hails from Madhubani constituency in Bihar took on the opposition in a veiled attack which left them spell-bound. Also Read - Republic Day Parade 2021: India Invites UK PM Boris Johnson to be Chief Guest This Time

The 30-minute-video shows the BJP MP expressing his thoughts on the discussion of the General Budget of 2015-16, presented by Finance Minister Arun Jaitley last month. The speech in the Upper House also left the Prime Minister Narendra Modi teary-eyed! Also Read - Swara Bhasker Takes on BJP MP Rakesh Sinha on Twitter, Reminds Him of Farm Protest

Donning the look of Bollywood-fame Sanjay Mishra, Hukmdev Narayan Yadav began his speech by remembering former Prime Minister, Chaudhary Charan Singh. Yadav said that how the lives of high-society people’s pets’ make a better living than farmers of this country these days.

Taking on the opposition to task for brushing aside Narendra Modi as a tea salesman, the BJP MP said that the people chose Modi who would become the PM and reverse the fortunes of farmers and people belonging to backward class. PM Narendra Modi was visibly in tears, when his hardship was being talked about!

Slamming the past government of forming economic policies by then Finance Minister, P Chidambaram, who studied abroad, Hukmdev Yadav said that India needed an Indian economist and not someone with a foreign degree (Chidambaram graduated  from Harvard University, USA). The 75-year-old politician also brought to light on the country’s Achilles Heel, the dreaded caste system being a barrier in India’s progress. Issues like Food Security Bill, Mudra Bank, Dhan Jan Yojana, and 12 rupees a year Life Insurance Schemes found place in his speech which was applauded by all parliamentarians!