‘I Know a Superhero When I See One’: Former Catwoman And The Hulk Laud Six-Year-Old For Saving Little Sister From Dog Attack

The Avengers might be our superheroes but for former Catwoman Anne Hathaway and The Hulk aka Mark Ruffalo, THIS six-year-old boy is the 'most heroic'

The Hulk star Mark Ruffalo recently said, “Real courage is knowing what is right to do and doing it even when it might end up hurting you somehow” and he was taught about it by a six-year-old who grabbed former Catwoman, Anne Hathaway’s attention. The incident came to light when The Dark Knight Rises star asked the Hulk, “Do you need a teammate?? (sic)” for there stood Bridger Walker, smiling into the camera with 90 stitches on his face after saving his little sister from a dog.Also Read - The Batman Trailer: Robert Pattinson is Violent Superhero, Joins Zoe Kravitz’s Catwoman to Make Deadly Combo, Watch

Bridger’s aunt Nikki Walker had shared a picture of the two kids before and after the incident. She elaborated in the caption, “My nephew is a hero who saved his little sister from an attacking dog. He, himself, took on the attack so that the dog wouldn’t get his sister. He later said, “If someone was going to die, I thought it should be me.” He got home from the hospital last night. I know it’s a long shot, but I’m reaching out to the Avengers and other heroes so that they can learn about this latest addition to their ranks (sic).” Also Read - Insane! US Rapper Lil Uzi Vert Gets Pink Diamond Worth Rs 175 Crore Implanted Into His Forehead | Watch

For his courageous behaviour, Bridger from Wyoming in US, caught the attention of Hathaway who gave a shoutout to the little brave boy. Taking to her Instagram handle, she expressed, “I’m not an Avenger, but I know a superhero when I see one. I can only hope I’m half as brave in my life as you are in yours, Bridger. Wishing you an easeful recovery, and many cool looking rocks. Hey @markruffalo, do you need a teammate?? (sic)”

I’m not an Avenger, but I know a superhero when I see one. I can only hope I’m half as brave in my life as you are in yours, Bridger. Wishing you an easeful recovery, and many cool looking rocks. ⁣ ⁣ Hey @markruffalo, do you need a teammate?? ⁣ ⁣⁣ Via @blackculturenews_ & @nicolenoelwalker

Smitten by the six-year-old’s bravery after the incident on July 9 where Bridger escaped with an injury on his left cheek, Mark gushed in the comments section of Nikki Walker’s another similar post. He wrote, “Mark Ruffalo responded to Bridger and said in the comments section, “Dear Bridger, I just read about what happened to you and I wanted to reach out to say this… People who put the well beings of others in front of themselves are the most heroic and thoughtful people I know. I truly respect and admire your courage and your heart. Real courage isn’t dominating people or fighting against people or walking around like a tough guy. Real courage is knowing what is right to do and doing it even when it might end up hurting you somehow. You are more of man than many, many I have seen or known. With Admiration…Mark Ruffalo (Bruce Banner/Hulk/Professor).” 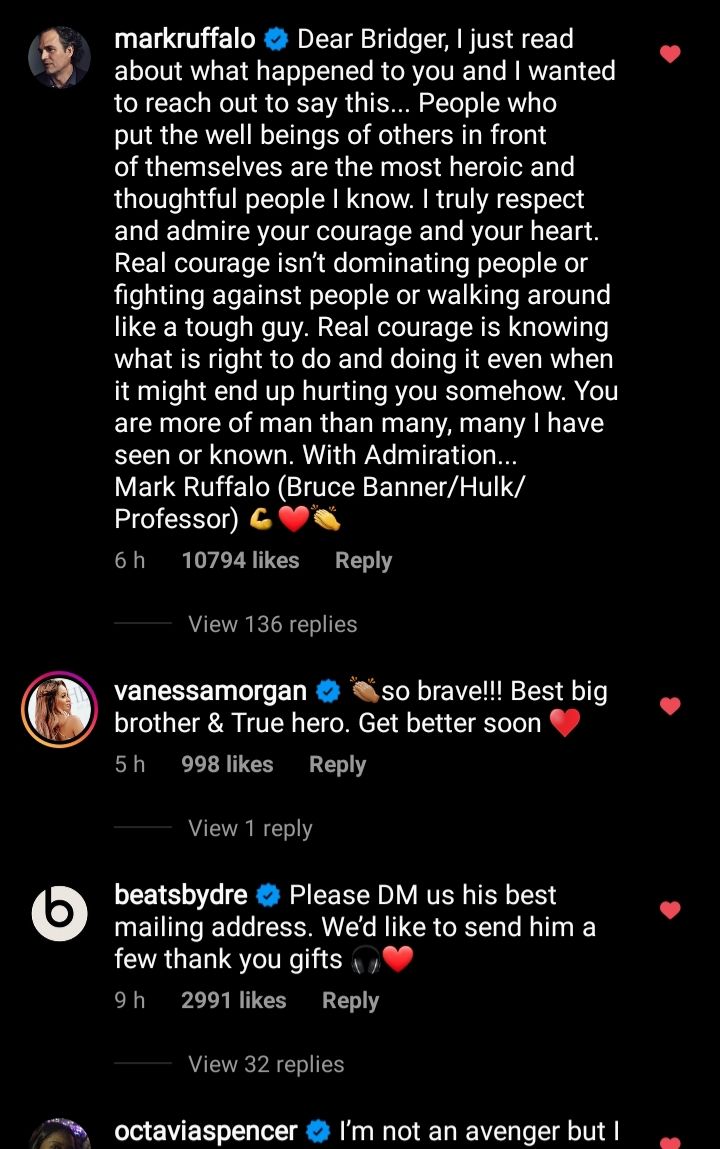 This is exactly the love note we need to take us through the rest of the week.