With rising temperatures, the mouth has worked as much as a sweat and has led to quite a few blow-ups. 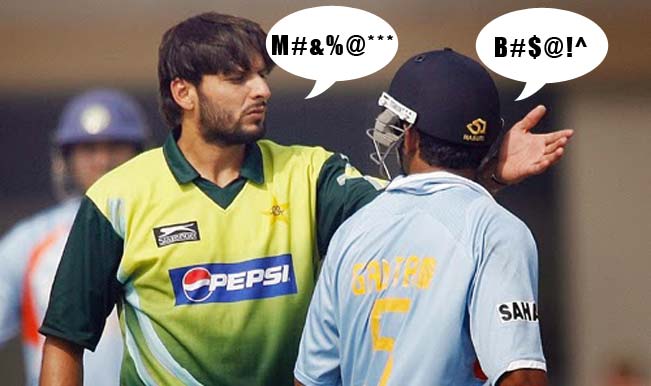 “It doesn’t matter how you fare in the World Cup as India as long you win against India”, is the mood that grips Pakistan players before going into a World Cup, the players have revealed. It has been documented that even the family members of the ones taking the field from either side of the border echoed similar sentiments in the past. An India-Pakistan encounter is the zenith of all cricketing battles and it’s a mishmash of all the fringe elements that come into the fray — the partition, the wars fought, and the hatred that seeps on communal lines — or the simple fact that they are neighbours alone is enough for the players to take off their gloves. Also Read - Rohit Sharma Responds to Comparisons With MS Dhoni, Calls Former India Captain One of a Kind Cricketer

That kind of pressure and the aura and the hype that surrounds an India-Pakistan battle has led to quite a few blow-ups in the past. The World Cups have had its fair share of moments too. As the opening match for both teams in the ICC World Cup 2015 continues the never-ending saga for bragging rights, here is a look back at all the controversial ,expletive-ridden face-off that is now etched in history in One-Day International (ODI) history. Also Read - Shahid Afridi on Relationship With Gautam Gambhir, Virat Kohli vs Babar Azam Comparisons

Indian batting legend, Sunil Gavaskar, a year ago revealed in an interview that whenever there was a battle against Pakistan, there was downright abuse that went both ways. It’s World Cup 1992 and the match was heading for a tense finish and the pressure was getting on to both teams. It was Pakistan who were dictating terms in the match at this point and Miandad is ticked off and stops a teenage Sachin Tendulkar in his run-up and is embroiled in a heated argument with the Indian wicket-keeper. Seconds before, there was a caught-behind shout and More made a vociferous appeal, which was turned down and it irked the erstwhile Pakistan batsman. Then, Miandad hoisted his bat in the air, holding with his other and started hopping frantically in an attempt to mock More.  India’s World Cup unbeaten run with Pakistan started here and the incident became one of the most talked about through the decades.

Chasing a stiff 289, Aamer Sohail was breezing along and the Bangalore crowd was stunned in silence. The local boy smashed another boundary through the off-side and then turns to Prasad, points the where he thinks he should set a fielder. The next ball: The ball is into the batsman and Sohail goes for a wild heave, misses it and the ball crashes onto to the stumps. The pumped up Prasad runs down the pitch and gives his counterpart an F-world sending off. Pakistan’s wheels came off in the chase and India brought up their second consecutive win in a World Cup.

A decade had passed and cricketing ties between the two nations had also gradually reduced. Pakistan toured India for a five-match ODI series and it was third, held in Kanpur. Gautam Gambhir was struggling a bit in the centre and the Delhi southpaw, never the one far away from a fight, riles up bowler Shahid Afridi and the two players are yelling stuff from 22 yards away. Gambhir steals a quick single and collides into Afridi (possibly deliberately) and Afridi is livid. A barrage of filth in Hindi and Urdu is spat out both ways and the umpire has to come in and separate the duo. India went on to win this match as well on the back of Yuvraj Singh’s heroics.

Gambhir features again in the second episode of ‘How I insulted your Mother’ and he plays his role to perfection. All it requires is a tiny bit of spark and Gambhir is all guns and swords. Pakistan keeper Kamran Akmal initiates a dialogue and the two clash in a forehead to forehead, eyeball to eyeball confrontation.  Yet again, the umpires had to intervene and warn the players. The action wasn’t done though in this pulsating 2010 Asia Cup match.

The action resumed in the tie and as a booming voice from the commentary box often screams out, “The match was heading down to the wire”. Harbhajan Singh had the onus of taking India over the line in Dambulla. The Rawalpindi express, Shoaib Akhtar bowled the penultimate over of the match. With emotions blowing over the roof, the pacer-spinner duo are involved in a slanging match. Mohammad Aamer bowls the last over of the match and Harbhajan smashes the bowler for a six to finish the match and runs straight to Akhtar, stationed at long off to taunt. The war of words continued. It was a fantastic end to a gripping tie.