In this village, women jump into wells daily to draw water using cups and jugs!

In the tiny Tarihal village, there are over 6000 residents. They used to draw water from the 4 wells in the village but owing to the heat and drought, all three wells have dried up.

The water crisis has hit India hard and majority of the agrarian region is reeling under the lack of water. Parts of Maharashtra and Karnataka are hit the most and the situation is going from bad to worse. While the regional governments are buying water and sending tankers to the rural areas, it is hardly enough. Families are dying in the heat, due to water scarcity. With even agriculture taking a toll, the situation is extremely bad. In many rural areas, farmers and the rural people are committing suicide as they are unable to sustain themselves and their families.Also Read - Two Women Fight Over Water in MP's Panna, Thrash Each Other With Utensils | Watch Viral Video

[ALSO READ: Two guys were complaining about reserved women’s seats on the Metro. The response an aunty nearby gave them will leave you stunned!] Also Read - 30 Indian Cities May Face Acute Water Shortage by 2050, Says WWF: Where Does Your City Rank?

But the craziness in this village in Belgaum region of Karnataka is unparalled. In the tiny Tarihal village, there are over 6000 residents. They used to draw water from the 4 wells in the village but owing to the heat and drought, all three wells have dried up. The villagers have nowhere to draw water from. Early every morning, the women use their buckets to draw water from the wells but now, since the wells have dried up, they do not know where to draw the water from. There are multiple organisations and the local civic bodies that send water to this village via tankers. But the number of tankers hardly matches their needs. Also Read - Climate Change is a Bitter Reality, This is How it Will Claim Your Life Gradually 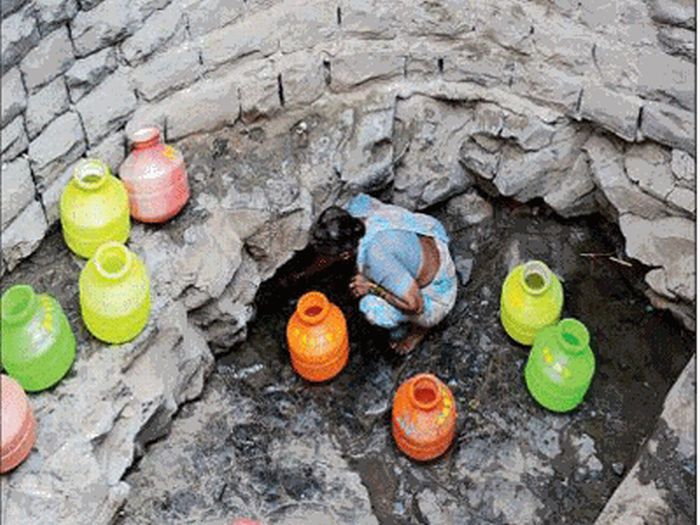 [ALSO READ: Meet modern Shravankumar who has been carrying his blind mother on his shoulder for the past 20 years to visit different shrines across India!]

The water from all the tankers is emptied in a well – which too barely gets half full. There’s a mad scramble as soon as the tankers arrive. Each family has designated members who go and draw water. Further, once the water levels drop, and the water cannot be drawn into the buckets, the women have no option but to jump right into the well. They jump in carrying small cups and jugs and draw the weater from the tiny crevices and cracks in the floor of the well where the water might be pooled. Even with the mad scramble, each family is hardly able to fill 10-15 buckets of water for all their needs – from cooking to cleaning to washing – which hardly suffices.

[ALSO READ: This mother did something brave and posted a video about her husband abusing her daughter to educate people and stop child molestation]

To add to their woe is another bizarre problem. Initially, all the villagers would defecate in the open. But now, the village has toilets and is 100 percent free from open defecation. However, this has added to their woes because now they need water for toilets too! While initially they did not need much water, now they need double the water to keep the toilets clean and free from stink. Also, the toilets need to be washed regularly which is leading to additional wastage of water. While health issues are being prevented on one hand, is wasting so much water in toilets viable when they are dying of thirst – villagers ask!

Many people have stopped agriculture and are only working towards managing to fulfil their most basic needs. All hopes are pinned on monsoon this year and villagers hope to get some respite soon.